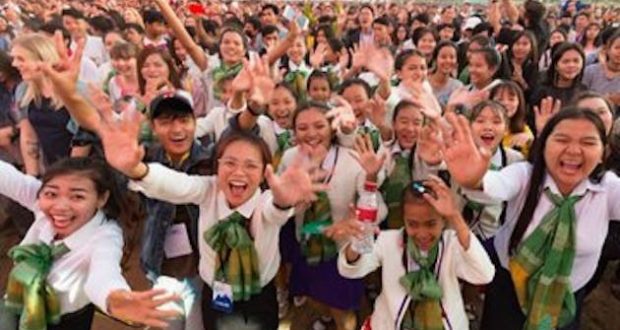 1,700 come to Christ in Cambodia at Franklin Graham crusade

A Gospel event hosted by the Billy Graham Evangelistic Association in Cambodia has seen an amazing harvest with nearly 2,000 professing faith in Christ with more in the days that followed. 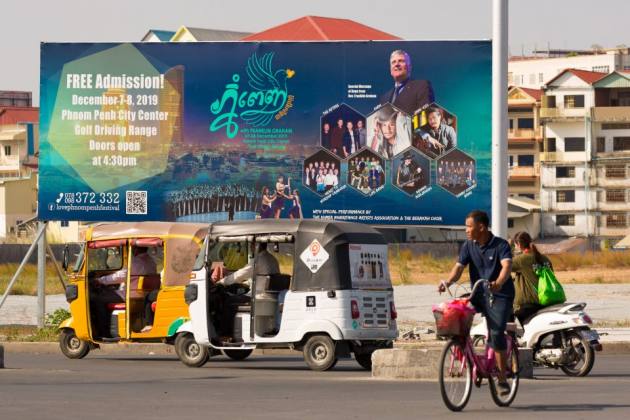 “Tonight you can be forgiven, but you’ve got to be willing to come to Jesus,” Graham declared. “You have a choice tonight. You can accept Jesus Christ or you can reject Him.”

Franklin spoke on Sunday night’s final session, with more than 13,000 people coming to listen. “Did you know that you have a soul?” Graham asked the sea of people. “One day you will die, but your soul continues to live… Your soul will live in the presence of God, or it will be separated from God. The decision you make tonight will decide where your soul will spend eternity.”

That night, more than 800 people marched forward to receive Christ for the first time.

“I feel very happy and joyful,” one lady, Chhimreth, declared after making the decision to follow Jesus.

Cambodia has made astonishing progress in regards to its attitude towards religious freedom. Remember, this is a country steeped in religious persecution. Between 1975-1979, at least 1.5 million people were murdered by the “Khmer Rouge” — a violent communist mob led by Cambodian dictator, Pol Pot. Thousands upon thousands of religious minorities were dragged out into the “killing fields,” butchered with pickaxes and buried in mass graves. 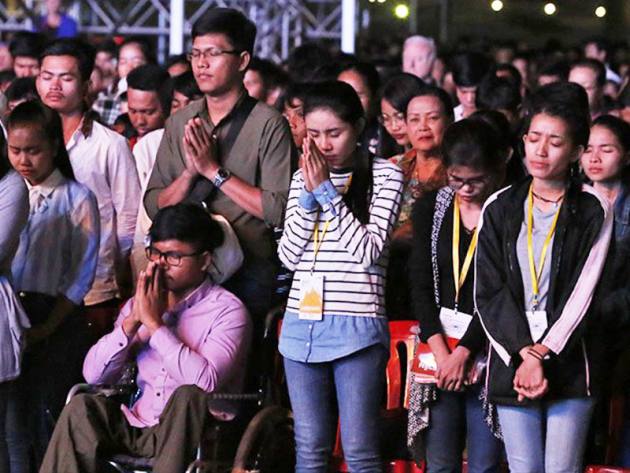 We had a great crowd come out tonight for the Love Phnom Penh Festival in Cambodia! We all have an emptiness that we can try to fill with things, but something is still missing. What we’re missing is Jesus Christ. He’s the only One who can fill the void that’s inside us.

We had a great crowd come out tonight for the Love Phnom Penh Festival in Cambodia! We all have an emptiness that we can try to fill with things, but something is still missing. What we’re missing is Jesus Christ. He’s the only One who can fill the void that’s inside us. pic.twitter.com/aJn0705TRT

In fact, the translator helping portray the gospel to those in attendance at the BGEA festival was a man named Barnabas Mam; one of just 200 Christians who survived the genocide.

“The church here has suffered so much as a result of the Khmer Rouge,” Graham said in a video taken at the event. “Almost a third of the population here was murdered. Today, the church has risen up out of the ashes. See what’s happened here… God is working in this country!”

Now, with 1,700 Cambodian people committing their lives to Jesus over the weekend, Franklin hopes that this will be the beginning of a new era for evangelistic work in this deeply scarred nation.

“We pray this [festival] will open the door for more of the Lord’s work in the future,” he concluded.

Cambodia is predominantly Buddhist, with around 95% of the population adhering to the religion. The practicing of other faiths, however, is permitted. “The law provides for freedom of belief and religious worship, provided such freedom neither interferes with others’ beliefs and religions nor violates public order and security,” reads a 2018 report from the State Department.

The report adds that the law “does not allow non-Buddhist denominations to proselytize publicly.”

Well, given that BGEA was permitted to hold such an enormous evangelical event in the nation’s capital, clearly things are changing in this country! Pray that God would continue to move among the Cambodian people!