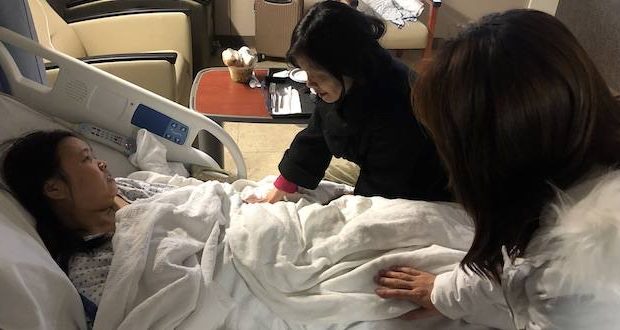 Peggy Lee (center) and Ginny Won pray with one of 50-plus injured bus passengers, as members of Grace Chinese Baptist Church in Richmond, Va., ministered in local hospitals after a mid-March accident near the city. Submitted photo

It was a typical Tuesday morning at Grace Chinese Baptist Church when I received an unexpected call from the church secretary, Evelyn Yao. My heart grew heavy as her words “bus crash” began to unfold.

“The hospital just called our church asking for help. They need Chinese translators.”

A charter bus carrying many Chinese passengers to New York City from Orlando, Fla., had crashed outside our city, Richmond, Va.

“The hospitals are overwhelmed,” Evelyn said. “Their handful of translators are insufficient. They need to get medical attention for the injured but are unable to communicate with them. Bilingual speakers who can speak Chinese and English are needed to help bridge the language divide. Are you available to head over to the hospital immediately to assist? I have also alerted our church members through the church chat group.”

As the day progressed, we learned from the local news NBC12 WWBT that the bus crash had occurred at 5:30 a.m. earlier that Tuesday morning. The bus had run off an exit ramp and overturned. The accident claimed two lives, an 81-year-old woman from Jamaica, N.Y., and a 37-year-old Chinese national. 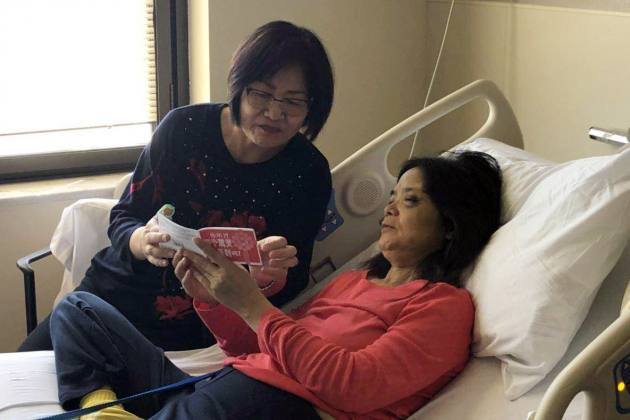 More than 50 people, ranging from toddlers to adults, were injured and taken to area hospitals.

For the next eight days, I watched as our church chat group exploded with daily needs, updates and prayer requests. I witnessed God intertwining the lives of our church members with the lives of those impacted by the tragedy in unexpected and marvelous ways.

One of the first to help organize and mobilize the church was Helen Huang, the wife of our church elder, Peter Li. She visited the hospitals to learn of the needs and quickly put together a list of hospitals, patient rooms, requests and shifts.

Church members took shifts to function as translators, bridging the language gap between patients and medical staff. They also assisted with purchasing new clothes and basic necessities because many patients had lost all their belongings in the accident.

“I was surprised to learn that most of them had never heard of Jesus nor been to a church,” Helen said. “I had the opportunity to spend time and pray with a particular patient in the hospital over the course of a few days. She came to accept Jesus as her Lord and Savior! We both cried as she repeated over and over again that the day of the accident was the beginning of her new life in Jesus. Days later, another friend of hers who was involved in the accident also accepted Jesus!”

On the other side of town, church members Stuart and Sarah Bice who own a local real estate company ferried patients from the hospitals to a local towing company to sort through unclaimed belongings. At the collection site, they served as translators.

“One of the hospital patients I talked to was a Buddhist,” Sarah said. “She kept repeating how unlucky and unfortunate she was. I was surprised when she allowed me to pray for her. I told her that Jesus loves her and to be thankful to God for a second chance in life. I had to hold my tears back as I hugged her.”

These were among the Spirit-filled testimonies I heard over and over as I watched our church members bridge the cultural and language divide in the midst of this mid-March tragedy.

As a direct result, our church was contacted by Central Virginia Interpreter Services about the overwhelming needs for similar situations in health care, schools, social services, worksites and particularly in the courts.

God was opening up an untapped mission field for our church. 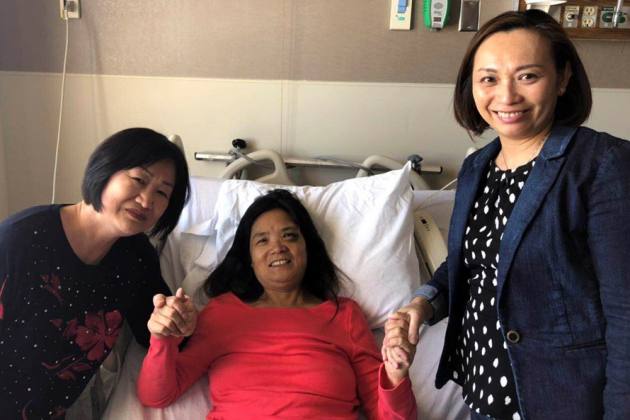 Helen Huang (left) and Kim Jim hold hands with one of 50-plus hospitalized bus passengers to whom members of Grace Chinese Baptist Church ministered after a mid-March accident near Richmond, Va.Submitted photo

There are so many who live in America today who are unable to communicate even the simplest needs due to their language and cultural background. It is in these situations that the ethnic churches shine the brightest. They bridge cultures in a multicultural country. Unfortunately, ethnic churches do not normally come to mind in mainstream religious America, but it is undeniable that they are playing an increasingly vital role as the landscape of American demographics changes and the focus on multicultural world mission increases.

As I reflect on the incident, I clearly see the restorative work of Jesus.

Scripture tells us the reason there are many languages is the consequence of man’s pride. Genesis 11:1-9 reveals the whole world originally had only one language. However, men wanted to build a tower that reached to the heavens so that they could make a name for themselves. As a result, the Lord confused their language so they would not understand each other and He scattered them over the face of the earth.

In ministering after the bus accident, we saw the pain, confusion and chaos of this consequence. But we also saw how those who follow Jesus began to bridge and close this division. We saw how God used the ethnic church to bring cultures together. We saw how God used His children to tear down walls that used to divide.

All of these are but a foretaste of what is to come as revealed in Revelation 9:9-10 — “a great multitude that no one could number, from every nation, from all tribes and peoples and languages, standing before the throne and before the Lamb, clothed in white robes, with palm branches in their hands, and crying out with a loud voice, ‘Salvation belongs to our God who sits on the throne, and to the Lamb!'”

Previous: Asia Bibi escapes Pakistan to join family in Canada
Next: Alzheimer’s and Baby Boomers: What you need to know