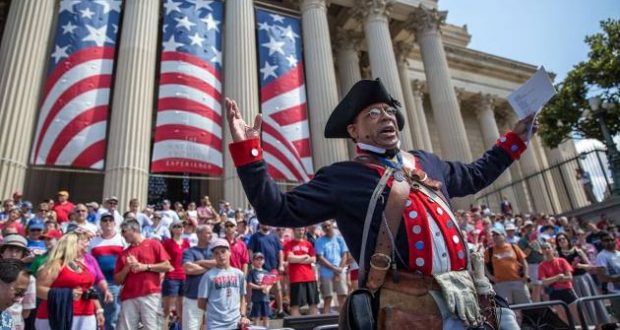 Celebrations have already begun in the nation's capitol. (EPTimes)

America to see most patriotic July 4th parade ever

America will see an Independence Day parade and celebration unlike any in recent memory.  President Donald Trump is increasing efforts to acknowledge the military branches which are responsible for the freedoms the nation enjoys, promising “incredible flyovers & biggest ever fireworks” for the Fourth of July activities in Washington.

“Big 4th of July in D.C. ‘Salute to America.’ The Pentagon & our great Military Leaders are thrilled to be doing this & showing to the American people, among other things, the strongest and most advanced Military anywhere in the World. Incredible Flyovers & biggest ever Fireworks!” the President tweeted.

Battle tanks were seen on a train in Washington on Tuesday after Trump said tanks and other military hardware would be part of Fourth of July displays of military prowess.

Reuters photographed M1 Abrams tanks and other armored vehicles atop flat rail cars in Washington on Tuesday morning, a sign of the military firepower that will be featured, differing significantly from past annual celebrations of the 1776 Declaration of Independence.

During his July 4 “Salute to America” event, Trump will deliver a patriotic speech at the Lincoln Memorial, accompanied by military flyovers and performances by the Army Old Guard Fife and Drum Corps and many others, according to U.S. Department of the Interior.

During his July 4 “Salute to America” event, Trump will deliver a patriotic speech at the Lincoln Memorial, accompanied by the largest military flyover ever and performances by the Army Old Guard Fife and Drum Corps and many other, according to U.S. Department of the Interior,

That evening, the Capitol Fourth concert, one of Washington’s favorite holiday traditions, will be followed by an extended fireworks show expecting to last 35 to 40 minutes. The fireworks display will be held near the Lincoln Memorial instead of its usual location by the Washington Monument.

The President’s Independence Day speech will cover “how wonderful this country is, our troops and military, our great democracy and great call to patriotism, the success of this administration in opening up so many jobs for individuals, what we’ve done for veterans,” said Senior adviser Kellyanne Conway.

Additionally, Thursday’s celebration will feature military flyovers by the U.S. Navy’s Blue Angels, as Interior Secretary David Bernhardt confirmed on June 28 that the beloved Blue Angels would perform at the event.

“I’m going to be here and I’m going to say a few words and we’re going to have planes going overhead, the best fighter jets in the world and other planes too and we’re gonna have some tanks stationed outside,” said President Trump on Monday, suggesting that tanks would be on display. 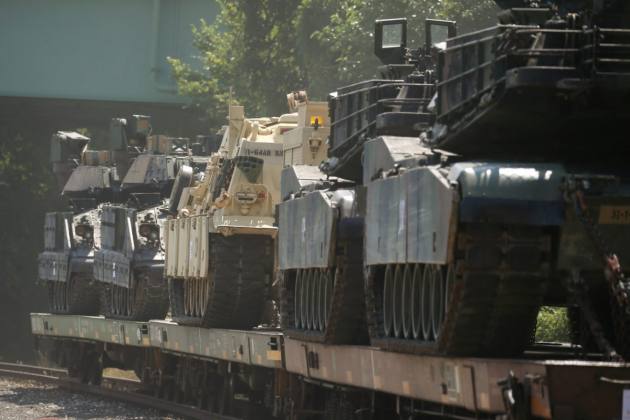 M1 Abrams tanks and other armored vehicles sit atop flat cars in a rail yard after President Donald Trump said tanks and other military hardware would be part of Fourth of July displays of military prowess in Washington, on July 2, 2019. EPTimes

The District of Columbia government, which is entirely controlled by Democrats, previously expressed concerns about the damage those heavy machines could do to city streets. “We have said it before, and we’ll say it again: Tanks, but no tanks,” the City Council complained in a tweet, which included an image of a 2018 Defense Department memo that suggested to use “wheeled vehicles only … in order to minimize damage to local infrastructure.”

In response, Trump said measures would be taken in order to protect the city’s infrastructure.

The M4 “Sherman” tank, first introduced into the North African theatre in 1942 and widely distributed through the Lend-Lease program, was known as the most widely used tank in the World War II. They have been out of service for more than 60 years. The M1 “Abrams” tank, weighing between 50 to 60 tons depending on variations, is currently making up the bulk of the country’s heavy armored forces.

“It’ll be special and I hope a lot of people come,” Trump said.