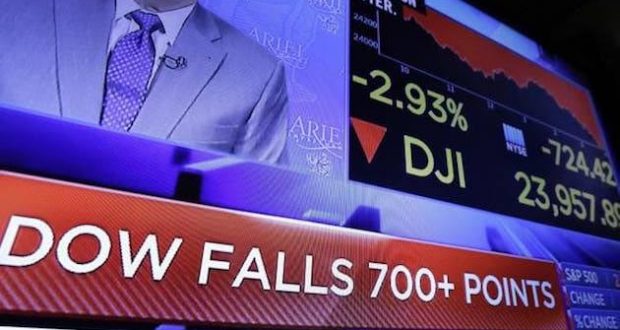 ANALYSIS: How the media misreading China caused the Dow drop

On Dec. 4, the Dow Jones Industrial Average had an 800 point drop, a plunge that apparently was caused by Westerners’ misunderstanding of China.

According to several media reports, investors had believed articles run by China’s state-run media that gave a different narrative than that offered by the White House about the meeting between President Donald Trump and Chinese leader Xi Jinping at the G-20 leaders’ summit in Buenos Aires, Argentina.

As a result, investors thought much less was achieved than what the White House and Trump had announced, and they feared nothing had been done to put a check on the trade war between the United States and China.

Economic analyst Qin Peng said that Western analysts’ reaction was naive. In China, the public that is able to “jump over the Great Firewall” and read Western news sources is well aware of how to interpret the regime’s propaganda. If the White House disagrees with the regime, believe the White House. In general, assume the truth is the opposite of what the regime reports.

According to Qin, the crash on Dec. 4 shows that not only didn’t investors know how to read regime propaganda, but they also didn’t understand the significance of what occurred in Buenos Aires or what the situation in China is.

Qin said that, as far as he could see, Trump actually won big at the meeting.

Beijing was forced to sit at the negotiating table and discuss things that they previously said they would never discuss.

China has started to buy U. S. pork, may start to buy U.S. soybeans as soon as January, and might reduce or remove tariffs on U. S. cars and other goods.

The key context for Beijing’s sudden willingness to deal, which international investors missed, is that the Chinese Communist Party (CCP) is facing “life-threatening” crises, Qin said.

“A worsening economy, mass unemployment, and Trump’s precise targeting of specific targets such as ZTE, Chinese state-backed semiconductor maker Fujian Jinhua, and Chinese entity Equipment Development Department (EDD) and its director, Li Shangfu, have all started to endanger the very existence of the CCP’s rule. These are what the CCP really cares about and fears. However, international media outlets fail to notice and report upon this,” Qin said.

The Chinese people are fearful of what the future holds. On July 25, both Xinhua and People’s Daily carried a story headlined “Preliminary Statistics Show that the Number of People in Our Country who Returned to Their Hometowns to Start New Businesses Has Reached 7.4 Million.”

When this headline appeared, Chinese netizens took screenshots and passed it around on social media, claiming, “What a creative way to talk about unemployment!”

Much attention is being paid on social media in China to a handwritten letter by a factory owner. In discussing it, netizens repeat the Chinese idiom, “yi ye zhi qiu”: When you see one falling leaf, you know autumn is here.

In the letter, the factory owner from Dongguan City, in the heavily industrialized southern province of Guangdong, apologized to his employees for closing his business and fleeing, since he couldn’t pay his suppliers. He asked his employees to sell the factory and take the proceeds. He said he’d rather have it sold by his employees than to have it taken away by the state.

He also appealed for his employees to either adopt his two dogs (one is pregnant) or release them and let them run free.

Qin said that businesses in China traditionally shut for the Lunar New Year and while they’re closed, they settle their accounts. This year, many businesses may not reopen, as, like the factory owner in Dongguan, they won’t be able to pay their suppliers.

Millions may join the ranks of the unemployed and will do so at a politically sensitive time.

The Chinese New Year falls on Feb. 6 this year, and the holiday lasts about two weeks. In early March, the Chinese regime has its annual weeklong showcase, the “Two Sessions,” which consists of the plenary sessions of the National People’s Congress and the National Committee of the Chinese People’s Political Consultative Conference (CPPCC).

Qin said the CCP fears that if anything goes wrong while those events are underway, it might be disastrous for the party.

A window into the CCP’s mindset can be seen, Qin said, in its attitude toward the eviction from Beijing last year of “low class” population. The international community protested the actions of Beijing Party Secretary Cai Qi, but the CCP believed he had done a great job by driving out “unstable elements” after two continuous years of economic slowdown.

The fundamental reason Beijing had to bend to Trump in Buenos Aires is that, since October, the Chinese economy has entered a “collapsing mode,” Qin said.

For the first time, China’s fiscal revenue growth entered negative territory with a 3.1 percent year-on-year decline in October. According to internal sources, Qin said, GDP growth for the third quarter is as low as 4 percent, and not the officially announced 6.5 percent.

China isn’t self-sufficient in terms of soybeans and pork, and must rely heavily on imports. After China imposed a 62 percent tariff on U.S. pork, 240,000 tons of pork were imported from Russia. That may have led to an outbreak of African swine fever throughout China, and caused great losses for Chinese peasants.

In fact, China was forced to import U.S. pork even before the Trump-Xi meeting in Argentina. According to U.S. Department of Agriculture figures released Nov. 26, China had placed the biggest order of pork since the trade war, which amounts to 3,348 tons to be shipped this year, and 9,384 tons for next year. Combined, they were the biggest weekly sales to China since April 2017.

Another complication faced by the Chinese regime is how the United States is making it more difficult for the CCP to steal technology. Since the Section 301 report in March about China’s technology theft, a number of actions have followed, including demanding China to give up its “Made in China 2025” plan that aims to achieve dominance in 10 high-tech fields and stop forced technology transfer. The United States has imposed new restrictions on investment from China and is investigating China’s “Thousand Talents Plan,” as well as other initiatives.

Increasing the pressure on the Chinese regime, the United States is forming a global coalition against the CCP. At the initial stages of the trade war, the CCP tried to form an alliance with Japan and European countries to fight against U.S. “unilateralism” and “protectionism.” However, the CCP found that countries had been signing or planning to sign trade agreements with the United States. Meanwhile, China’s “One Belt, One Road” initiative has backfired, drawing negative publicity around the world for its extortionate lending agreements.

Qin argued that for these reasons, the CCP has chosen to make some compromises, just as it has done many times before. And the United States should be vigilant and not give it time or space to delay.