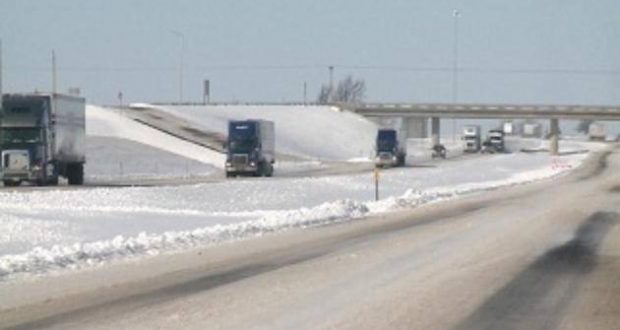 Roads across the region remain treacherous Monday morning even after road crews attempted to remove snow.

The problem? Rain that swept through the area turned to ice on the wet roads under the snow.

Across the metro crews are struggling to respond to the blizzard that dumped anywhere from 5 to 14 inches of snow across the region. Even areas with lighter amounts had blizzard conditions yesterday as winds reaching 50 mph tore through the area.

From Oak Grove to Olathe, Pleasant Hill to Pleasant Valley, roads were still primarily snow-packed. Interstate highways remain treacherous as well. Because of the conditions many businesses have joined local schools in closing for the day or, at least, opening for business later in the afternoon.

“We use straight salt with magnesium chloride to help melt the snow, although it takes sunlight and traction to help activate it. In these colder temperatures and with no sunlight, it will sit there until we get traffic and sunlight to make it work,” Wilson said.

Both Missouri and Kansas have asked drivers to postpone getting out this morning and to show some patience in the rare snow event. It has been 8 years since the region experienced a blizzard and four years since Kansas City officially received more than 3 inches of snow in one storm.

The Kansas Department of Transportation asked drivers to postpone travel around the Kansas City area and use patience as crews continued to clear roads. A spokesperson warned of icy spots on bridges and overpasses.

The Missouri Department of Transportation says most major roads still have snowpack on them as of Monday morning, even though MoDOT crews had been out treating and plowing the interstates and major roadways.

According to local morning newscasts, roads are a mess when it comes to driver accidents Monday morning. Several slide-offs occurred across the area with roads still slick as wind chills remain in the single digits.

Warmer temps are expected later this week but it may get dicey Thursday through Saturday as the temps will be just above freezing with more rain expected. It’s possible that it could be heavy snow again instead of rain if temps don’t reach their expected highs.