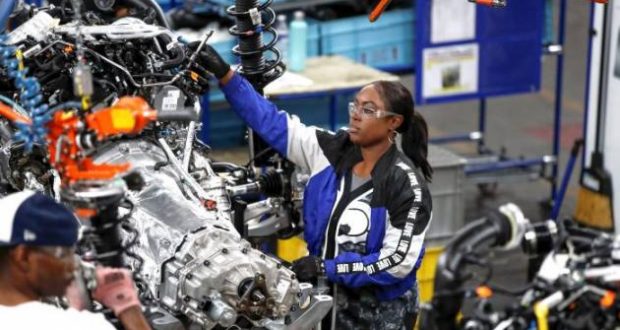 The unemployment rate among black Americans reached 5.5 percent in August—a historic low. That’s even down from 6 percent the month before and a substantial 0.4 percentage point below the previous record in May 2018.

Black unemployment has been breaking records since the first year of the Trump administration in Dec. 2017, when it sank to 6.7 percent. That was the first time the rate broke below the 7 percent mark according to the Bureau of Labor Statistics (BLS) data, which reaches back to 1972. The only time the rate even hit 7 percent before 2017 was in April 2000, for a single month, shortly before the dot-com bubble burst.

Other historic news for black workers shows that over the past year, the lowest earners got a significant pay increase.

In early 2018, blacks were entering high-wage industries with the fastest salary growth (about 3 percent) while lower wage industries were slower to have job openings for blacks just entering the job force. But over the past year, annual growth has been strongest in industries that hire young or more inexperienced workers—about 4.7 percent—according to an Aug. 2 data analysis by Martha Gimbel, research director at the job-seeking site Indeed.  That has resulted in record employment for young black adults and teens who had traditionally been shut out of economic growth under previous presidents–including the recovery under President Barack Obama. Under Obama, job growth and wage growth for blacks of all ages remained at record lows while unemployment remained high.

That trend has been completely reversed under the Trump administration’s economic policies.

The economy added 130,000 jobs in August, down from a whopping 159,000 the month before as a result of retailers ending their summer hiring boom as schools resumed.

While still at historic levels, job growth has slowed down in recent months at least partly due to the U.S.-China trade conflict. The economy, however, is still adding, on average, more than the 100,000 jobs a month necessary to keep up with population growth.

While a media narrative remains negative on nightly newscasts and the internet, the truth is the overall unemployment rate stayed at 3.7 percent in August.

President Donald Trump has gradually hiked tariffs on a majority of imports from China. By May, he had 25 percent tariffs of $250 billion worth of annual Chinese imports. The moves have had a devastating effect on the Communist government of China with a historic decline in the country’s forecasted GDP output and factories closing as factories move to countries with more fair trade policies.

China retaliated by imposing tariffs on $110 billion of U.S. goods. China already had tariffs on most U.S. goods, which the Trump administration said was already an unloved and unfair playing level.

On Sept. 1, the Trump administration began imposing 15 percent tariffs on an additional $112 billion worth of Chinese goods. The new tariffs target goods such as clothes, boots, shoes, watches, furniture, diapers, milk, and chocolate.

In retaliation, China started to impose additional tariffs of 5 percent and 10 percent on a variety of American goods, including soybeans and crude oil. Other countries are already lining up to take up the slack having previously been underbid by China on the world grain and oil markets.

Trump plans yet another round of tariffs in December, to which China is expected to retaliate. Economists say if Americans have the willpower to support the American tariffs on China, the trade relationship will be completely redesigned with a U.S. consumers and manufacturers the ultimate winners for decades to come. But, economists say, negative U.S media reporting is helping communist Chinese negotiators at the expense of Americans.

China has much less room for escalation though, since it only imported about $120 billion worth of U.S. products last year and its imports this year were down more than 18 percent in July, compared to the same period in 2018.

Trump’s goal is to force China to open up its market more to American goods and drop underhanded practices, such as forced technology transfer from foreign companies, theft of U.S. intellectual property, and currency manipulation.

China, it appears, is trying to wait Trump out, hoping that a different administration will give it more favorable treatment.