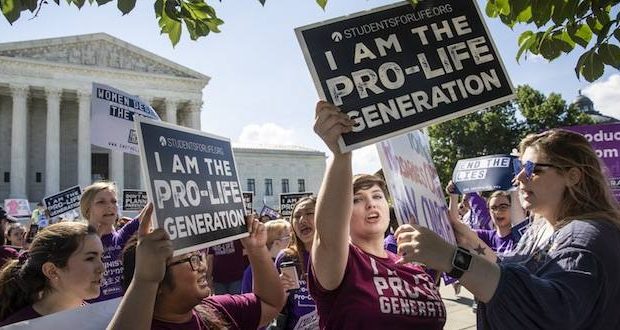 Pro-life Californians share their views on the grounds of the state capitol.

The Alliance Defending Freedom is accusing California of having secretly changed the meaning of a law under pressure from abortion advocates. As now stated, the law forces churches and churchgoers to fund abortions, according to Jeremiah Galus, Senior Counsel of ADF.

Galus recently represented a San Diego church to argue for a repeal or reversal of the regulation before the court on Nov. 4.

In August 2014, the state of California reinterpreted the Knox-Keene Act, which is over 40 years old, to require health care plans to cover elective abortions, he said.

“It did so after being pressured by Planned Parenthood and some other abortion advocates who were upset that a couple of Catholic institutions like Santa Clara University and Loyola Marymount University had changed their healthcare plan to bring them in line with their religious belief about abortion,” he said.

Galus wrote in an article published on the website of Times of San Diego that the two above-mentioned Catholic institutions “announced they were removing elective abortion coverage from their employee healthcare plans to align with Catholic teaching on abortion and the sanctity of life.”

“Within days of news breaking that Catholic universities dared to be Catholic, a floodgate of emails, phone calls, and meetings opened between California’s Department of Managed Health Care (DMHC), Planned Parenthood, the ACLU, and the National Health Law Program. By December of 2013, DMHC was working in tandem with the trio of abortion lobbyists to make sure Loyola Marymount and Santa Clara were stopped cold and no other religious organizations could jump ship,” he wrote.

Galus finds this “quite shocking.”

“The state would reinterpret this 40-year-old law basically in secret, without getting reviews and opinions of those that would be affected,” he said.

READ: Media gets it wrong on Missouri abortion reporting

Galus’s co-worker California Family Council President Jonathan Keller pointed out that the decision did not pass through the state legislature and get signed by the governor, but was made behind closed doors only through DMHC, an unelected regulatory agency.

Even worse, Galus said, DMHC made the coverage effective immediately. They sent letters to health insurers telling them that the plans they had been providing to churches and religious organizations without elective abortion coverage were illegal and that they needed to provide such coverage immediately.

They did this without notifying the churches who would negotiate the plan contracts with the insurers, Galus said. So since August 2014, California churches and religious organizations have been forced to cover elective abortions, because every plan that didn’t have that coverage before was made illegal by the state.

He said the state basically eliminated the market that had existed before.

“They made this change, knowing that would only affect churches and religious organizations. So they really went out of their way to force pro-life organizations to provide this sort of coverage. And it is kind of a new law to do that, and it violates the free-exercise clause in the Constitution because it is targeting the religious exercises and churches,” Galus said.

Keller said that they are trying to force churches and religious organizations to participate in the abortion business by making them pay for it, and every church, synagogue, and mosque in California is involved. The condition makes them either leave their employees without health insurance or use the contributions of believers to pay for abortion coverage that doesn’t conform to their beliefs.

Galus said the Knox-Keene Act only requires health insurance plans to cover medically necessary services and basic health care services, and the state is saying that all abortions—including elective ones—are medically necessary. He thinks it is changing the real meaning of the law.

Either way, Galus said, they cannot force churches to violate their faith by providing this sort of coverage, because the U.S. Constitution takes priority over any state law. Churches are free to operate according to their faith without the government’s interference, and the Constitution protects freedom of religious practices, he said.

Keller said their great concern is that this doesn’t just mean abortion must be covered if the life of the mother is at risk; it means every insurance plan has to cover abortion for any reason.

He hopes the court will listen to the argument from Alliance Defending Freedom. He also hopes the judges will recognize that the mandate of the law violates the First Amendment’s guarantee of freedom of religion, and the judges will overturn the attempt to force churches and other faith organizations to pay for abortion out of their members’ contributions.