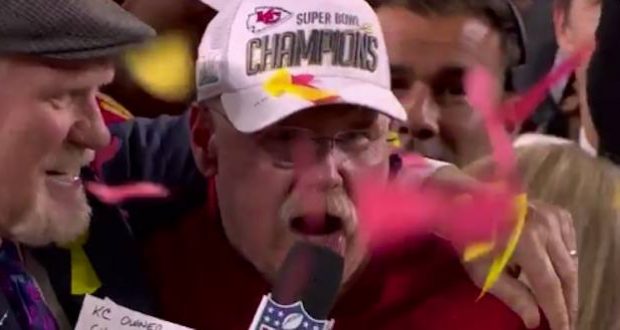 Kansas City officials are expecting 1 million people to attend Wednesday’s parade for the victorious Kansa City Chiefs. But that might not be the only place to catch the team as they’ve been invited to visit the capitol in their home state of Missouri.

“The city of Kansas City, Missouri & the Kansas City Chiefs invite all fans to a @Chiefs Kingdom Champions Parade for our #SuperBowl Champions. The parade will be held on Wednesday, February 5, 2020, starting at 11:30 a.m. Visit the #chiefsparade website at http://www.chiefsparade.com,” according to the city’s Twitter account
Kansas City Mayor Quinton Lucas tweeted, ‘LET’S HAVE A PARADE WEDNESDAY!!!!”

Businesses as well as numerous area school districts have announced or are considering plans to close for the celebration. Hospitals are rescheduling surgeries.

The last time Kansas Citians saw such a massive event was in 2015, when a crowd that official estimates said reached 800,000, turned out for the Royals World Series parade. The commission’s spokeswoman, Katherine Fox, told KCUR’s Up To Date program that the parade will be similar but not identical to the 2015 celebration.

“I think we learned a lot from the Royals parade,” Fox said. “We’ve been working very closely with the city and fire and police and EMT, just to make sure that if we do see the crowds that we’re expecting that we have some protocols in place to handle that.“

The snow in the forecast for Wednesday could complicate plans. City officials are still working out the final route for the parade and other details The latest information can be found at www.chiefsparade.com.