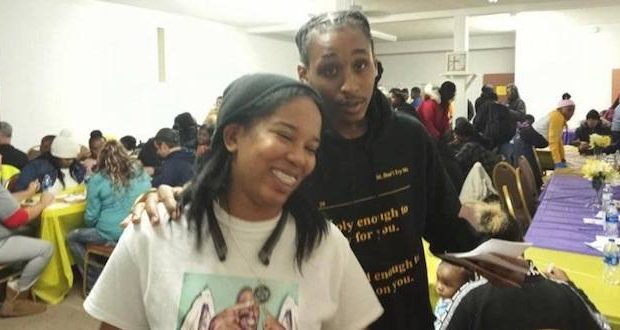 Shell West with Pastor Tim Hayes. The two partnered with D'Mario Gray to host the event.

Church and nightclub team up to serve the hungry on Thanksgiving

One reason why Jesus was so effective was that he was willing to go where the needs were the greatest, not just to the synagogues. A midtown Kansas City church is doing the same by partnering with a nightclub.

The first “Show Me You Care” Thanksgiving community dinner by the D’Mario Gray Foundation brought the unlikely pair together. “This all started from a Facebook post,” said D’Mario Gray, organizer and manager at 9ine Ultra Lounge.

Smaxx, a restaurant in the 18th and Vine District, helped bring his vision to life by serving as host for the free Thanksgiving community dinner.

“We have turkey, dressing, macaroni, green beans and yams,” owner Tiara Dixon said. “We will have all of that. We will be able to serve the community and get back to doing what we love the most — feed people.”

Gray said he couldn’t have done it alone, which is why he enlisted the help of 9ine Ultra Lounge owner Alphonzo Hodge and close friend and clothing line owner Charles Shirley.

“When you get the club and the church next to each other, doing something for the community, it has never been heard of,” said Timothy Hayes, pastor at 24 Hour Faith Training Center. “When people can break down the barriers and the ties holding us back as the community, this will show the world that we are a better place.”

Gray said it proves anyone can make a positive impact. “I know I can’t change the world. I always like to give back,” he said. “When I do give back, it’s like the best feeling in the world.”

In addition to the meals, the group also handed out cold weather gear, including coats, scarves and gloves, bags of food and 200 turkeys. Gray plans to host another community dinner for Christmas.

Previous: Report: Impeachment effort based on ‘hearsay, presumptions, and speculation’
Next: After one complaint, Army nixes Bible verse on dog tags