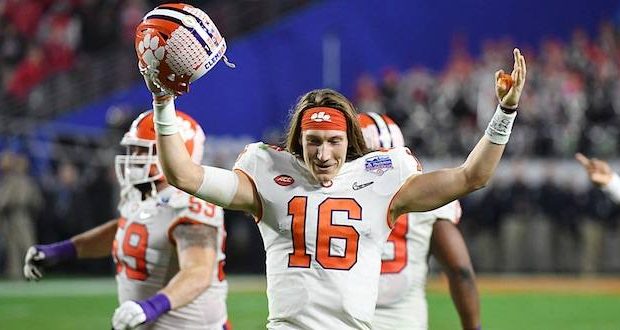 Clemson University quarterback Trevor Lawrence once again will have an opportunity to share his faith with a national audience in next week’s national championship game. For a while during last Saturday’s semifinal game against The Ohio State University, it looked as if it may not happen.

Although the Buckeyes led the Tigers 16-0 in the second quarter, Lawrence rallied Clemson to a 28-23 victory and a matchup with Louisiana State University in the national championship game.

In a post-game interview with ESPN, he spoke of scripture and his teammates.

“Just the fight of this team — didn’t play great, didn’t look pretty, but [we] just find a way to get it done,” Lawrence said. “I wouldn’t want to do this with anyone else. I have Ephesians 3:20, and it says, ‘God can do immeasurably more than any of us can because of him within us.’ And that’s just so true. I mean, all of us, me, what we did tonight, it ain’t us. It’s about this program and who we are.”

This was not the first time Trevor Lawrence has pointed to his faith in the limelight. The quarterback’s Twitter profile photo is an image of the word “Jesus” and account bio reads, “Pursuing Him at all costs.”

The star athlete credits his Christian faith with keeping his feet firmly planted through the success, pressure and expectations of his position on a championship team, once telling a reporter, “Football’s important to me, but it’s not my life. It’s not the biggest thing in my life. I would say my faith is. That just comes from knowing who I am outside of that. No matter how the big the situation is, it’s not going to define me.”