Democrats abandon ‘So help me God’ in swearing in procedures

Virtually all Democrat-run committees and subcommittees have abandoned the oath “So help me God” since taking control of the House. Democrat leaders of several key committees have nixed the phrase from a swearing-in oath for individuals testifying before them but not without Republicans reminding them of the 200-year history of the phrase.

“I think God belongs in religious institutions: in temple, in church, in cathedral, in mosque — but not in Congress,” Democrat Rep. Steve Cohen of Tennessee, the chairman of the Judiciary Committee’s Subcommittee on the Constitution, Civil Rights and Civil Liberties told The New York Times. What Republicans are doing, he continued, “is using God.”

Rev. Franklin Graham, who serves as president of the Billy Graham Evangelistic Association has blasted the move as backward.

“Why has the Democratic Party turned its back on God? @RepCohen of TN said, ‘I think God belongs in religious institutions: in temple, in church, in cathedral, in mosque—but not in Congress,’” Graham said in a series of tweets Tuesday in response to the report.

“We need more of God, not less! What @RepCohen is suggesting is what Communism did in Eastern Europe & is still doing in places around the world like Cuba. Communism only allows worship inside approved churches,” he continued. “God is our Creator & the maker of the universe. He is present everywhere; He is not limited to churches or temples. The root of the issue is that many politicians don’t want God in any part of their politics or our country’s business because His standards condemn their sins.”

Republican lawmakers, The New York Times reported, are also staging a form of protest, by pointing out each time the phrase is omitted in real time.

“I am a sinner, I make mistakes every single day, but I do think that we could use a little more of God, not less,” Representative Garret Graves of Louisiana reportedly told his colleagues seated around the dais of the House Natural Resources Committee.

When Democrat Rep. Diana DeGette of Colorado, who leads the House Energy and Commerce oversight subcommittee, recently omitted the phrase to swear in a witness earlier this year, Republican Rep. Jeff Duncan of South Carolina, pointed out that “the oath was incorrect and incomplete.”

“This is the oath we use, and that’s the oath we’re going to use today,” DeGette insisted.

Degette was praised by a coalition of secularist groups, led by the Center for Inquiry.

“The rest of Congress could learn something from Chairwoman DeGette’s support for the constitutional separation of church and state,” Jason Lemieux, Director of Government Affairs for the Center for Inquiry said in a statement. “She stuck to her guns in upholding the secular character of our government, and lo, the world did not come to an end. Instead, she helped the approximately 95 million nonreligious Americans feel represented by their government.”

Rep. Mike Johnson, a Republican from Louisiana, who is lobbying for the oath to return to its original form, argues that some would believe including “so help me God” is mere symbolism but it has much greater meaning for those who believe.

“The intention behind it was to express the idea that the truth of what was being said was important not just in the moment, but would go into eternity, and someone was watching and would ultimately be our judge,” Johnson said. “Some would call that mere symbolism, but to many of our founders, it was deeper than that.”

The phrase, which is constitutional, is even used in Supreme Court hearings and swearing in ceremonies. Democrats have arbitrarily stopped using the phrase without a need to do so.

Previous: How child molesters think and act and how to protect children from them
Next: PBS show ‘Arthur’ criticized for gay wedding scene 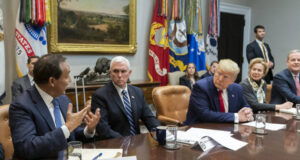