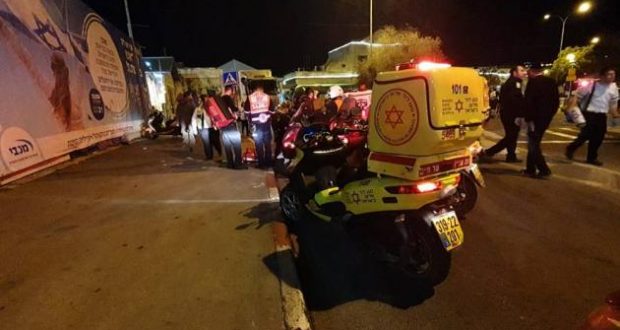 Magen David Adom personnel at the site of the car ramming attack near First Station in Jerusalem. Feb. 6, 2020. Photo provided.

Security forces have arrested the Palestinian man responsible for injuring 12 soldiers when he rammed his car into them early Thursday morning outside First Station. The attacks on Israelis some just a week after the announcement of a Mideast peace plan.

The man was arrested at the Gush Etzion Junction in the West Bank Thursday evening, police said. He was handed over to Israel’s Shin Bet security service for interrogation.

“Following an extensive operational and intelligence effort, the IDF, working with the Shin Bet, the Israel Police’s special police unit and other special forces, has arrested the terrorist who carried out the ramming attack in the predawn hours of this morning in Jerusalem,” the Israel Defense Forces (IDF) said in a statement.

The ramming attack severely injured one soldier, who remains hospitalized.

“He is unconscious and connected to a respirator in the intensive care unit,” hospital officials told Israeli media.

He and the other soldiers involved in the attack were in Jerusalem to attend a swearing-in ceremony at the Western Wall that morning.

Israeli Prime Minister Benjamin Netanyahu vowed that Israel would catch the perpetrator, saying that “terrorism will not defeat us.”

The car-ramming incident is one of 3 terror attacks against Israel in just 12 hours.

Hours after the attacks on Israeli police, a terrorist opened fire at police officers near the entrance to the Temple Mount. The officer was lightly wounded in the attack.

“A terrorist opened fire at border policeman. One policeman was injured lightly in the shooting. Police responded by opening fire at the terrorist and neutralizing him. Areas in the city closed,” a police spokesperson said in a statement.

Initial report: At 01:47, the MDA 101 Emergency Dispatch Center received a report of 3 pedestrians who were injured by a car on David Remez St in Jerusalem. MDA EMTs and Paramedics are treating 1 seriously injured, 1 moderately and one lightly. Photo credit: MDA Operational Unit pic.twitter.com/RwbDg6f6sk

Hours after that, an Israeli soldier was lightly wounded in a shooting attack against a military post near the West Bank settlement community of Dolev.

The officer was treated at the scene and taken to the hospital with minor head injuries. The terrorist fled the scene.

Israel’s 12 hours of terror comes after Hamas called for a Palestinian uprising against Israelis on Wednesday.

“We call for escalating confrontations with the occupation and its settlers and fighting their assaults against the land and holy sites, especially the blessed Al-Aqsa Mosque,” Hamas said in a statement posted on its official website, referring to the Temple Mount in Jerusalem’s Old City.

The terror group is calling for violence in response to Israeli security forces shooting and killing a Palestinian teenager during clashes in Hebron.

“We affirm that this heinous crime is another one of the Israeli occupation’s crimes of intentionally targeting innocent civilians and children among our people,” the Hamas statement added.

According to the IDF, the teenager threw a firebomb at soldiers during the riots.

“During a violent riot that took place a short time ago in the city of Hebron, IDF troops spotted a Palestinian throwing a Molotov cocktail at them. They responded with live fire in order to remove the threat,” the military said.

Hebron is an especially tense place where Israelis and Palestinians live in close proximity. The flashpoint city has been embroiled in violence for several days since US President Donald Trump released a ground-breaking Israeli-Palestinian peace plan.

A spokesperson for Abbas said Trump’s long-awaited plan “created this atmosphere of escalation and tension by trying to impose fake facts on the ground, which we have repeatedly warned against.”

“The revolution raging in the West Bank cities and in Jerusalem is the implementation of the Palestinian people’s decision to expel the occupation from the West Bank and free it of settlers,” the terror group said.