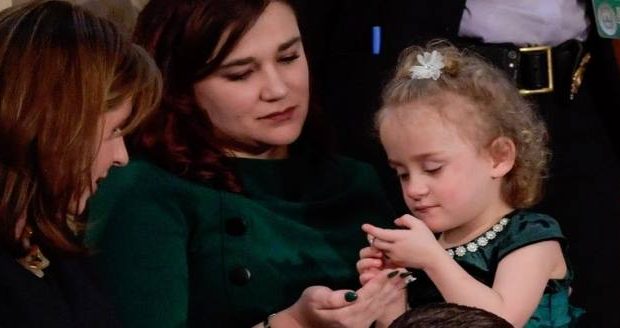 Ellie back home after after State of the Union address

A Kansas City girl is back home after she was featured in President Trump’s State of the Union address on Tuesday night. The sleepy-eyed toddler made her national TV premier in her mother’s arms.

The White House said 2-year-old Ellie Schneider is one of the youngest babies to survive in the United States, born at just 21 weeks and six days. President Trump introduced Ellie and her mother, Robin, saying Ellie is now healthy.

“Healthy 2-year-old girl sitting with her amazing mother, Robin. In the gallery, Ellie and Robin, we are glad to have you with us (the House chamber) tonight,” Trump said, to loud applause.

Robin and Ellie interviewed once they got home:

Ellie and Robin received a bipartisan standing ovation from Congress, as well as from Vice President Mike Pence and House Speaker Nancy Pelosi. The president credits Ellie’s recovery to her medical team at St. Luke’s, as well as the prayers of the parents and from the Kansas City-area community.

The St. Luke’s Hospital website says it’s one of the largest faith-based care hospitals in the region, and has been recognized by “U.S. News and World Report” as one of the nation’s elite hospitals.

Trump said the goal of Congress should be to ensure that every baby has the best chance to thrive and grow, like Ellie.

“Ellie reminds us that every child is a miracle of life, and thanks to modern medical wonders 50 percent of very premature babies delivered at the hospital were Ellie was born now survive, an incredible thing,” he said..

Ellie and her mother were special guests of the president and First Lady Melania Trump, and sat near the first lady.

President Trump then pivoted to the radical abortion stance embraced by mainstream Democrats, much to the dismay of Speaker Pelosi. He also called for a ban on late-term abortion.

Previous: ‘Night on Earth’ leads ‘5 Family-Friendly Things’
Next: Many businesses fail to include faith as part of diversity programs