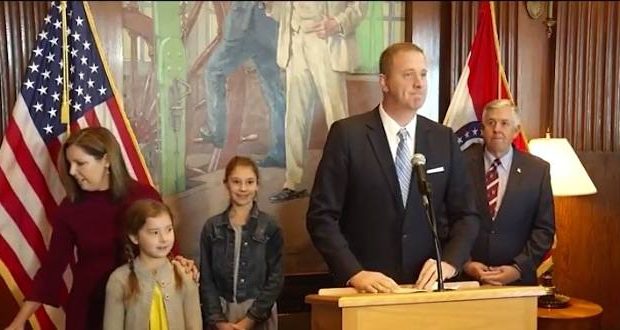 Parson made the announcement Tuesday morning in a press conference.

“We’ve known for months this day would come. I knew that making a quick decision would help make a smooth transition. It was important to appoint someone thoroughly vetted by the people of Missouri,” Parson stated.

Schmitt, introduced by the governor, stated he was thankful to take on the role. “I promise to fight each and every day so the next generation of Missourians have the same opportunities that I have enjoyed.”

Hawley will be moving to the U.S. Senate, after defeating Democratic incumbent Claire McCaskill in last week’s election.

This is the second statewide office that Parson will fill since taking over as governor last June.

It has been 93 years since a Missouri governor last appointed someone to the position of attorney general.

He appointed Mike Kehoe to be lieutenant governor, a post Parson held until taking over the governor’s office when Eric Greitens resigned from office. Greitens stepped down rather than continue fighting possible impeachment and allegations of personal and political misconduct.

Hawley beat long-time incumbent McCaskill in a tough election which saw millions poured into the state by activists including liberal billionaire George Soros who supported McCaskill’s failed bid to retain her seat.