Home / News / Culture Watch / Even after closing on Sundays, Chick-fil-A revenue twice that of McDonalds 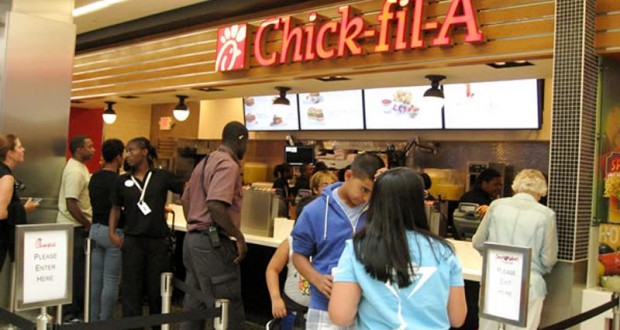 Even after closing on Sundays, Chick-fil-A revenue twice that of McDonalds

Being closed on Sundays to give employees a sabbath rest has not harmed the bottom line for Chick-fil-A. The company has announced revenue numbers that are the envy of the fast-food industry.

The chain, which is known for its caring staff and strong Christian ethos, has become the fifth-largest fast-food company in the US, according to new data analyzed by investment banking company, Goldman Sachs.

Incredibly, despite shuttering its doors on the Lord’s day, the specialty chicken outlet has managed to generate over double the per-store sales revenue of its well-known competitor, McDonald’s.

“Our brand survey shows that Chick-fil-A has had the most brand momentum across [fast-food restaurants] — supporting the most increase in total revenue (in dollar terms) in the US,” the Goldman analysts wrote in their report, according to Business Insider.

The firm also noted a word of advice in light of the restaurant’s meteoric rise — “steer clear from those in the fray of Chick-fil-A,” the analysts wrote. “Our 2,000 consumer brand survey suggests they will continue to take share and grow.”

Last year, Chick-fil-A generated a staggering $10 billion in sales, up from just $2 billion in 2005. Their location numbers are growing, too. Despite KFC shutting down 1% of all its outlets, Chick-fil-A has opened an additional 8%! Clearly, this restaurant chain is being blessed.

The restaurant’s popularity was clear to see in Mebane, N.C., this week as devoted customers camped out overnight to get a chance to win free chicken for an entire year.

And the loyal fans certainly received their reward — an electronic card which entitled them to some 52 Chick-fil-A meals over the next twelve months!

“Being involved in our community and mentoring our young team members is what is most important to us, so we are thrilled to develop new and existing relationships with the Mebane area,” branch manager Todd Perkins said in a news release, according to Fox 8. “My team and I are incredibly honored to expand our opportunity to serve and bring a new Chick-fil-A to our guests who can enjoy our delicious food and genuine hospitality.”

Does Chick-fil-A ever open on Sundays?

Yes, but only for very special occasions. For example, an Alabama branch opened up its drive-thru back in January after a 14-year-old autistic boy expressed a desire to spend his birthday working at the popular eatery.

So, after a quick conversation with the chain’s owner, the restaurant was declared open for service and the kid’s birthday wishes were granted!

Another example comes from September of last year. As the population of North Carolina continued to reel from the effects of Hurricane Florence, one local branch called in employees to serve the ailing local community with delicious fried chicken sandwiches.

Staff distributed roughly 500 of them to stricken residents and hand-delivered some 1200 nuggets to a number of different shelters.

Previous: US moves to prevent Turkey from invading Syria
Next: Israeli breakthrough: Tracking molecular changes in the brain