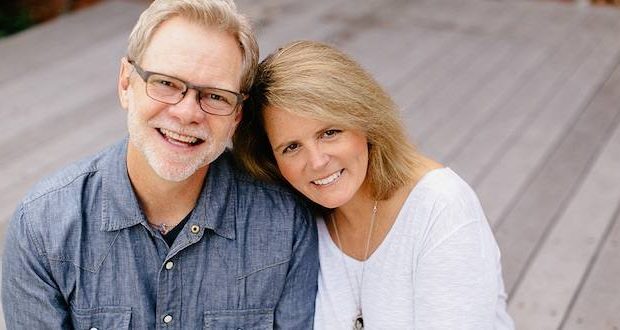 Steven Curtis Chapman with his wife of 34 years, Mary Beth.

Most of our memories are connected in one way or another to music.

Remember when you took your car out for your first solo ride, the radio blaring? Slow danced with someone special? Wept at a funeral? Or perhaps, when you gave your life to Jesus at an altar call? They likely all had one thing in common. Music.

Music keeps score. As Michael Jackson said, “Music is the soundtrack to life.”

For the past 30 years, many Christian music fans have marked their milestones to the music of Steven Curtis Chapman. Now, on Nov. 15 at the Folly Theater in Kansas City, his fans can get a personal tour through Chapman’s own soundtrack.

“SCC Solo: A Night of Hits, History and Influences” is a culmination of 31 years of the music and life of this multi-Grammy Award-winning singer-songwriter and author. His book, “Between Heaven & the Real World: My Story,” is somewhat the script behind the music on this tour.

“It’s really a unique kind of thing that I’ve been, over the years, kind of creating — this little bits and pieces of just telling my story, using music to kind of take people on this journey,” he said during a recent phone interview. “… There have been a lot of songs that reference the journey that I’m on — and others — that we’re on together.”

Chapman’s memoir chronicles growing up, his faith journey, his marriage and family, the death of his daughter, Maria, in an accident in 2008, and adopting children. He lays it out story by story, song by song.

“This tour and these concerts are really that set to music,” he said. One story is about how he grew up in a musical family and that the very first song his dad taught him how to play on the guitar was Johnny Cash’s “Folsom Prison Blues.”

“I play a bit of that in the concert,” Chapman said. And then he talks about how that song evolved into his own music.

“That’s really what this concert is,” he said.

He said to think of his concert as a book that’s been turned into a movie. If the movie is done really well and a person hasn’t yet read the book, they might go, “Wow! It’s a great story!”

“Then you’ll want to go read the book,” he said.

Since his first album came out 31 years ago, “there have been a lot of seasons in life that I have shared with people,” he said.

“The amazing thing is … so many people will tell me, ‘You know your songs have been kind of the backdrop or soundtrack to my life,’” – raising kids, getting married, getting a first job, losing a job or losing a family member or sadness and joy and grief in those songs have been all kind of part of the soundtrack for a lot of people,” he said. “It’s just amazing to me and humbling. It just blows my mind to think how many people will say, ‘We had your song sung at our wedding.’”

The other day someone said they walked out of their wedding to his upbeat song “Dive” – representing how they were diving into life together.

“Just having those kinds of connections with people through the years, I feel like with this concert I’ve had a lot of people who said, ‘Man, I’ve never laughed harder and cried harder at a concert,’” Chapman said. “It’s just a lot of memories and a lot of shared journey together, which is a pretty remarkable thing and a great gift.”

Chapman wants to take concertgoers on a journey of remembering, knowing the power of music can send a 60-year-old back to high school. The intentional act of remembering is how he fell in love with his wife all over again.

“You can hear that song again and it takes you back,” he said. “In my experience and the shared experience I have with so many listeners to my music, it’s a lot of remembering our journey of faith, too. Music can do that. It can help us remember when we really need that.

“On this road we’re traveling, sometimes we forget, it gets dark and we feel like gosh I’m alone. I don’t even know if God is hearing my prayers or cares about me. And I know that feeling,” he said.

But, Chapman pointed out that it’s at those times that a person has to stop and remember — “Remember when God did this in my life, and we shared this together?

“We go back and revisit that and retell that story, because if you look at the Bible, God told his followers in the Old Testament — the Israelites — to do that, to build memorials where they would go and remember,” he said.

These “remembering stones” would be stacked and were a visible pause: “Hey, remember what happened here.”

Chapman said, “It’s a powerful, important thing in our journey. It’s kind of what these songs can be and really what this night is.”

He also wants people to “remember into the future.” Christians trust in something they haven’t fully seen or experienced yet. “We trust by faith that God has made these promises and so there’s also a lot of remembering into the future, this is how the story is going to unfold and we believe in that and trust in that.

“That is kind of the hope for the night.”