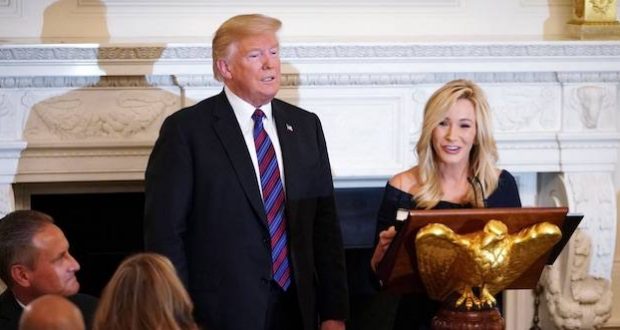 Paula White speaks next to President Trump at the White House.

The selection by President Donald Trump of Paula White as his personal faith advisor is drawing criticism, according to a story in liberal Newsweek. Richard W. Painter, who is not a pastor but served as the chief ethics lawyer in President George W. Bush’s White House, alleges she is committing “fraud” and running a “Ponzi scheme.”

According to The New York Times, White is working  “in the Office of Public Liaison, … which is the division of the White House overseeing outreach to groups and coalitions organizing key parts of the president’s base. Her role will be to advise the administration’s Faith and Opportunity Initiative, which Mr. Trump established last year by executive order.”

Since taking on the official role, the evangelist’s ministry has continued to sell crosses, bibles and other religious items that the organization claims will provide spiritual and material benefits to buyers.

Critics are furious, labeling those and other items as part of the “prosperity gospel.”

“This prosperity gospel scam by ⁦@Paula White⁩ tests the boundaries between religious freedom and criminal mail fraud and wire fraud,” Painter tweeted . “‘Send me money and God will make you rich.’ Now she uses her White House position to make her sales pitch.”

Painter was the ethics advisor when Bush told the nation that Iraq possessed chemical weapons and then used that claim as a pretext for America’s most costly war since WWII. The Bush administration was later forced to admit there were no chemical or nuclear weapons in Iraq.

Painter earlier raised related concerns about White. “Paula White now is running her faith-based Ponzi scheme from inside the White House,” he wrote in a tweet, sharing a link to a Newsweek article that reported on criticism of Trump’s adviser.

White has repeatedly objected to her belief system being labeled “prosperity gospel.”  In an interview on Fox News she claimed that she’s had to defend the existence of the Holy Trinity, and stated that “most of this is a political ploy just to hurt our president,” and concluded that she has “very solid biblical beliefs.”

The evangelist says the media fascination with her is aimed at creating division and cracks in the strong evangelical support the president still enjoys. “You know, people are going to say some pretty ridiculous things all the time. I think this is ending very, very well as we see that evangelicals support President Trump at an all-time historical high. The base is stronger than ever.

“I’ve been in ministry for 35 years and I’ve heard just about everything said. First off, I do not believe that, in this — what you would say, like, you give to get, and that is what they try to label it as prosperity,” White told Fox.”I believe that God’s and his only begotten son, Jesus Christ. I’ve had to defend the trinity, of all things, that God the Father; God, the Son; God, the Holy Spirit. I think most of this is a political ploy just to hurt our president, to hurt the great faith agenda that he continues to advance. Anyone that’s ever listened to my message knows very well, that I believe in very solid biblical beliefs. So, this is not anything new.”