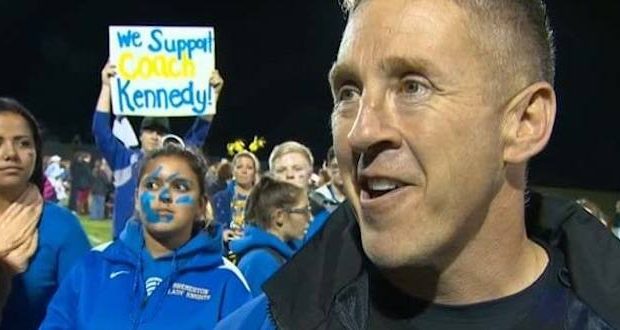 A former football coach in Bremerton, Wash., who was suspended in 2015 because of public prayer, is continuing to fight for his right to combine faith with football.

“At the beginning. it was kind of awkward to me, because I was just giving thanks,” Joe Kennedy told CBN News this week. “And I had a couple of kids, and they came up and said, ‘Hey, coach, what are you doing out there?’ ‘I’m just giving thanks for what you guys did.’”

These post-game prayers on the 50-yard line caught on, spilling over to his players and even to opposing teams. School officials worried this might give the appearance that the district approved of Coach Kennedy’s public prayers, creating a potential endorsement of religion. They eventually fired Kennedy, who calls that act a violation of his right to free speech. His attorneys argue this case is about the First Amendment and religious liberty.

“No one should ever have to choose between living their faith and their job,” said Latan Watkins, an attorney with First Liberty Institute, which represents Kennedy. “Coaches, teachers, students do not shed their constitutional rights just by walking onto a football field or a public school.”

Early this year, the Supreme Court declined to consider the case. Four justices, however, expressed potential interest if the case explored whether the school’s demand for Kennedy to stop praying violated his right to practice his religious beliefs based on the First Amendment’s free exercise clause.

“We consider that little opinion our roadmap to victory in coach’s case, and we’re going to follow that now,” Watkins said.

The case is back in district court. Kennedy has returned to the football stadium to support the team – but from a different perspective. Now he’s watching from the stands.

“I’m still thankful for being able to come here, and we still got a team,” he said. “I still see these young guys out here and seeing them out there praying still out on the. So that’s kind of cool.”

Although he misses the kids, he says he’s no longer bitter about losing his job.

“I was blessed for eight years with these guy,” the popular former football coach said. “ And it was just awesome, and I look at my blessings instead of what I lost.”

Previous: She was the ‘Moses of her people’: film on the life of Harriet Tubman opens in theaters
Next: Austin school district to teach sodomy to 8-year-olds, use gender-neutral names for parents