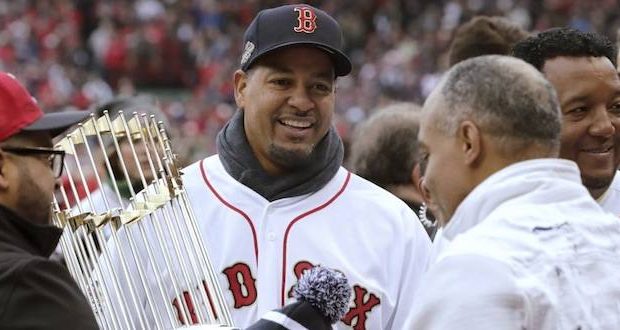 Manny Ramirez was a key contributor on the Boston Red Sox team that won the 2004 World Series. He also marched to his own drummer and inspired the phrase, “That’s Manny being Manny”.

In retirement, however, he is serious about his Christian faith. He has apologized to Boston fans for past mistakes and revealed that he came to faith in Jesus and has enrolled in seminary to study the Bible.

Ramirez’s comments appeared in a Boston Globe article about his being honored by the Sports Museum in Boston at its annual “Tradition” event. Ramirez said he was sorry for selfishly forcing the team to trade him to the Los Angeles Dodgers.

In explaining his faith in the article, he said he found God and that “what I’m doing now, I preach. That’s what I do. Go into hospitals just to preach and teach the people the Bible.” He also explained that he enrolled in seminary “because I just wanted to learn. I’ve been doing that for five years now. It hasn’t been easy. It’s something great.”

Describing himself as a “Reformed Baptist,” he has devoted himself to growing in the faith with the same vigor he brought to the baseball diamond.

“I’m growing,” he said. “It takes time. It’s like playing baseball. If you want to be the best, you got to hit it every day. If you want to get to know God, you have to have a relationship with him.”

Ramirez, who is now 47, said his life was transformed when he began studying God’s word and sharing the good news with others.

“It hasn’t been easy,” he said of his efforts to learn more and Grown closer to God’s word.  “It’s something that’s great. It’s changed my mind-set. I’m like a rookie. I’m just on the bench. Sometimes they give me 10 minutes or 15 minutes. And that’s it… I’m growing. It takes time. It’s like playing baseball. If you want to be the best, you got to hit it every day. If you want to get to know God, you have to have a relationship with him.”

Ramirez also talked about temptation brought on by fame and a lot of money and how it brought lots of terrible things during his his career. “With all the power and all the fame, if you don’t learn, you’re going to keep falling,” he admitted, before adding that “when God calls, you should humble yourself and you can see.”

Ramirez lives in Miami with his wife, Juliana. They have three boys, one of whom has graduated from college, and the other two are still teenagers. In addition to his preaching in hospitals, Ramirez is listed as a board member with “Planted Ministry,” whose mission is to work for “ spiritual awakening across Latin America.

You have two ways to support Metro Voice. As an Amazon Affiliate, we generate funds just from your browsing on Amazon. Check out the links below. Secondly, you can choose to support our efforts with just $1. You can do that below as well.