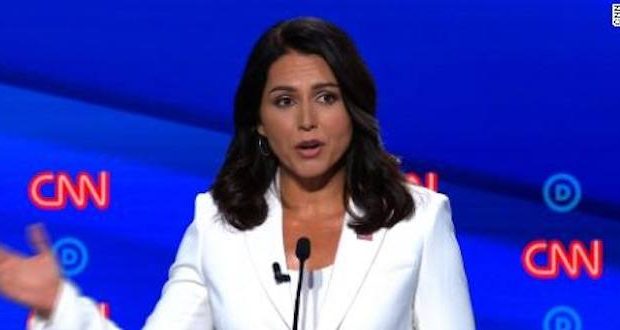 Moderate Democrat primary candidate and party outsider Rep. Tulsi Gabbard (D-HI) is charging the Democratic National Committee with corruption and favoritism after it deliberately  ignored a recent Boston Globe/Suffolk University poll putting Gabbard at 6% — her highest showing in the presidential contest so far.

The Suffolk/Globe poll, released November 25th, found Gabbard polling at 6% nationwide, a significant jump in position from other, earlier national polls, which put Gabbard between 2% and 3%, well out of both the first and second tiers of candidates. In the Suffolk/Globe poll, Gabbard competes directly with second-tier candidates like Sen. Kamala Harris (D-CA) and polls just behind the four recognized front-runners: former Vice President Joe Biden, Sen. Bernie Sanders (I-VT), Sen. Elizabeth Warren (D-MA), and South Bend mayor Pete Buttigieg, all of whom cleared double digits.

To appear on the DNC’s debate stage in December, candidates must show a fundraising base of at least 200,000 donors, and a significant showing (more than 1% support) in at least three “recognized” polls before the end of November. If the DNC counts the Suffolk/Globe poll, Gabbard makes the stage.

But the DNC doesn’t count the Suffolk/Globe poll.

In a statement released on Friday, Gabbard cried foul on that decision, accusing the DNC of deliberately ignoring the Suffolk/Globe poll even though it may be more reliable than other, recognized polls.

“Again, this is another example of the DNC being arbitrary and inconsistent. New Hampsire is the first in the nation presidential primary, but the DNC has not shown its voters the respect they deserve,” Gabbard said in an email to supporters. “The Boston Globe is the largest newspaper in New Hampshire. The pollster the Globe uses is recognized by the DNC for other media outlets, there is no reason the DNC should not recognize this Boston Globe poll, other than adherence to a subjective, non-transparent process where party elites try to dictate to the primary voters.”

That, however, is the only evident reason that the DNC doesn’t count that specific Suffolk poll — and the rule does not appear hard and fast. The process for selecting which polls count is secretive, and the DNC refuses to comment on the matter to even major media sources.

Gabbard has done well for herself running against the “establshment” Democratic National Committee and its 2016 presidential candidate, Hillary Clinton. Gabbard was a mostly unknown entity before the summer of 2019, when she attracted Clinton’s attention. Clinton accused Gabbard of being a “Russian plant” plotting to destroy Democrats’ chances in 2020 on a podcast in October, kicking off a public feud that elevated Gabbard’s profile and attracted the attention of even conservative voters.

The DNC’s decision here seems to underline Gabbard’s accusations, made in the wake of the Clinton ordeal, that the DNC wants her as far away from the “mainstream” candidates as possible.