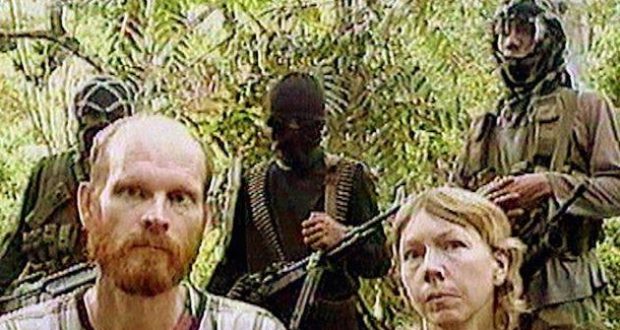 Garcia and her husband Martin at the beginning of their long captivity.

Gracia Burnham hated herself more than her terrorist captors

During her long captivity in the dense Philippine jungle, Kansan Gracia Burnham came to realize she hated herself.

“The hardest thing for me was seeing myself for what I really was. When everything was gone, the real me surfaced that I didn’t even want to believe existed. I saw a hateful Gracia. I saw a faithless Gracia. It was shocking,” she says.

Burnham and her husband, Martin, were working as missionaries for the New Tribes Mission when the Abu Sayyaf terror group kidnapped them and others, from the Dos Palmas Resort in Palawan in 2001. What was intended as a short break for an anniversary celebration turned into a nightmare.

The couple were held hostage for over a year, eventually being found by the Philippine military in 2002. In the ensuing battle between the military and the terrorists, Martin was killed in the crossfire.

During the recent Voice of the Martyrs Advance Conference in Washington D.C., Burnham revealed how God used their ordeal to plant seeds of faith in some of her abductors. She also said that the hardest part of the captivity was not being dragged around in the jungle with her foot bleeding from the long walks, or being forced to sleep at night using only a rice sack to provide cover from the jungle floor, it was coming to grips with her herself and who she was as a person.

The missionary said she was not sure if God would answer her prayer, but she recalled God’s promise that “He would change us so much that we would start looking like Jesus.”

“God started changing me. He can bring peace to the broken hearted. He can bring good things out of pain. He keeps giving us a day of grace to serve Him again,” she narrated.

Burnham told the audience at the summit about how she became frustrated during her captivity when Abu Sayyaf leaders received ransom money for their release, but instead of setting them free, they asked for more money.

She recalled that she begged the militants to just take the money and let them leave, but the group did not listen. She noted that her husband told her that night how glad he was that Jesus had already paid their ransom.

“Jesus’ payment for us was sufficient. It satisfied God and there doesn’t need to be anymore sacrifice for sin,” she told the crowd at the conference.

Burnham believes that her experience in captivity not only profoundly changed her, but it also planted seeds of faith in her captors.

She said at least four of her kidnappers went on to give their life to Christ with the help of a military couple in the Philippines.

In an interview with Mission Network News in 2016, Burnham revealed her gratitude in playing a small part in leading her captors to Christ.

“I have found some of the guys who held us captive, in a maximum security prison in Manila, and I’ve been able to work with them in a small way through a missionary couple who works in the prison,” she told Mission Network News.

Burnham said that the work of the missionary couple had reminded her that her time in captivity and the death of her husband had not been wasted.

“Others are reaping what we sewed ever so long ago. God is Almighty, and He can do anything,” she said.