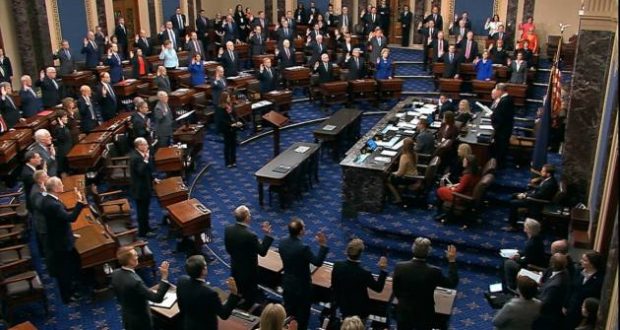 U.S. Senators being sworn in for the impeachment proceedings. Photo: Senate Television screenshot.

Even with wall-to-wall coverage of the impeachment on television, Americans have responded with a collective yawn as ratings lagged. But for those interested, here’s a list of the who, what, when and where of the impeachment trial of President Donald Trump.

Tuesday’s proceedings did not end until nearly 2 a.m. with Wednesday’s proceedings also expected to last into the night. Senate leader Mitch McConnell tallied 11 wins as Democrat amendments were defeated one after another. Many of the amendments were aimed at drawing out the proceedings with the hopes of having the trial lasting into the summer, according to impeachment analysts. Republicans, with a goal of ending it quickly, held their 53 seat majority together in defeating the Democrat plans.

Trump was impeached by the House of Representatives on Dec. 18, 2019, without a single Republican vote. The two articles of impeachment charge him with abuse of power and obstruction of Congress, neither of which is an actual crime.

Chief Justice John Roberts, who will preside over the trial, was sworn in on Jan. 16.

Roberts, 64, was nominated to the Supreme Court in 2005 by President George W. Bush. He was directly confirmed to be chief justice following the death of Chief Justice William Rehnquist.

Unlike other sorts of trials, if Roberts does make a ruling, 51 senators can vote to overrule him.

The Senate will hear the arguments for and against removing Trump from office. It holds enormous power during the proceedings, having the ability to dismiss the charges or acquit Trump with a simple majority vote, or to convict the president, removing him from office, with a 67-vote supermajority.

Since the Republicans hold a 53–47 majority (including two independents who caucus with the Democrats) in the chamber, it’s widely considered unlikely that Trump will be convicted.

More than a dozen witnesses testified during the House impeachment inquiry. A majority vote is required to call witnesses during the Senate trial.

If witnesses are called, Democrats are seeking the testimony of four witnesses, including former national security adviser John Bolton and acting White House Chief of Staff Mick Mulvaney. Republicans have said they want to hear from former Vice President and current presidential hopeful Joe Biden and his son Hunter Biden.

The senators themselves, in their roles as jurors, will have the opportunity to submit questions in writing. Under the rules, senators may even be called as witnesses in the trial.

Prosecutors and the Defense

In a normal courtroom proceeding, prosecutors aren’t aligned with a political party. In this case, all seven House impeachment managers are Democrats.

Democrats say Trump abused his office by asking Ukrainian President Volodymyr Zelensky to “look into” possible corruption by the Bidens, noting that Joe Biden is a Democratic presidential contender. They’ve sought to connect a hold placed on congressionally approved military aid to Ukraine to the request, arguing that Trump was using it to pressure Ukraine.

“The president withheld hundreds of millions of dollars of military aid to an ally at war with Russia, withheld a White House meeting that the president of Ukraine desperately sought to establish with his country and with his adversary the support of the United States, in order to coerce Ukraine into helping him cheat in the next election,” Schiff said on Jan. 19 during an appearance on ABC’s “This Week.”

Democrats also say Trump blocked Congress from investigating the allegations against him by declining to allow some current and former advisers to testify to the House.

Trump’s team says he can’t be removed for abuse of power, saying the prosecution needs “proof of an actual crime.”

“Abuse of power alone, and history has shown this, similar to also obstruction of Congress, those types of articles of impeachment have been tried on for size before, but they have not fared well,” Ray said on Jan. 19 in an appearance on Fox News’ “Sunday Morning Futures.”

Trump, who will be in Davos, Switzerland, for the 2020 World Economic Forum during part of the trial, has repeatedly said he didn’t do anything wrong and that House Democrats are playing politics.

“They didn’t want John Bolton and others in the House. They were in too much of a rush. Now they want them all in the Senate. Not supposed to be that way!” he said on Twitter on Jan. 20.

Tagged with: 411 behind the scenes chief justice roberts hearings how does impeachment work impeachment info key players McConnell nadler trial trump who's who