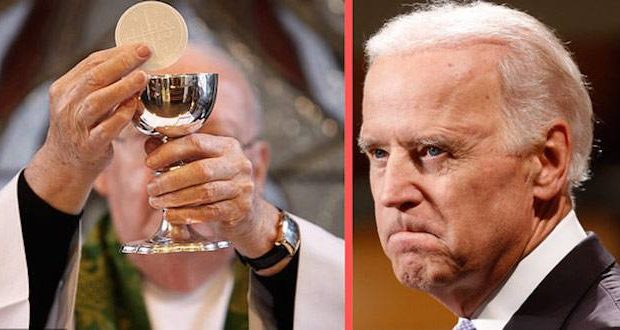 Joe Biden continues to hold onto his lead in polling for the Democrat Party presidential nomination. However, his position on abortion may dampen the Catholic vote in the general election this fall and his ability to take communion.

Cardinal Raymond Leo Burke, who is a member of the Vatican’s highest court, said a recent decision by a South Carolina priest to deny communion to the former vice president over his abortion advocacy was “right and just”, according to The Christian Post.

Last October, Biden, who is a lifelong Catholic, was refused communion at mass at Saint Anthony Catholic Church where Father Robert E. Morey serves as pastor. Morey confirmed that Biden was denied the sacrament because of his advocacy for abortion rights.

“Sadly, this past Sunday, I had to refuse Holy Communion to former Vice President Joe Biden,” Morey said at the time. “Holy Communion signifies we are one with God, each other and the church. Our actions should reflect that. Any public figure who advocates for abortion places himself or herself outside of church teaching.”

The rebuke from Morey came after Biden publicly objected to a proposal to outlaw abortions in South Carolina after about six weeks of pregnancy, including in cases of rape or incest.

“Let’s be clear, this ban is dangerous and directly violates a woman’s constitutional right to choose,” Biden tweeted “We must stop it. As president, I will codify Roe into federal law and ensure this choice remains between a woman and her doctor.”

Burke said politicians who profess to be practicing Catholics will not get a pass when they are involved in “public grave sin.”

“I demonstrate that in the whole tradition of the church, the discipline with regard to not admitting people who are involved in public grave sin, after having been admonished, has been constant and that it certainly applies to those who publicly support abortion and so-called same-sex marriage legislation,” he said.

Previous: Today is Sanctity of Human Life Day
Next: Chinese city under quarantine as virus spreads around the world