Home / News / Israel / Historic: Jews, Christians pray at The Hague to call nations back to Jerusalem 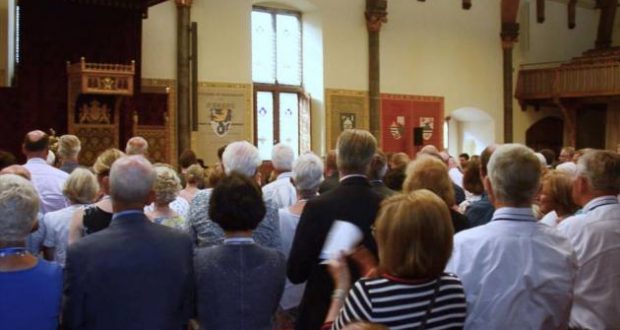 Historic: Jews, Christians pray at The Hague to call nations back to Jerusalem

In 2017 something amazing began that brought Jews and Christians together – to pray for the peace of Jerusalem. This year the prayers emanated from The Hague – the seat of world judicial power.

Since the end of World War II, The Hague has been known as the world’s court and source of international law. That’s why hundreds of Jews and Christians met here in The Netherlands to speak and pray.

“We came to pray and do a shift because the Bible is very clear that law is centered and goes forth from Jerusalem,” said organizer Jack Van Derg.  “We have proclaimed that the change now, that the law will no longer go out from The Hague, but will go out from Zion.”

Some spoke about a specific connection between scripture and what is going on in the world today.

Evangelides notes the European nations didn’t heed the warning and are facing consequences for deliberately leaving God out of their constitution.

“They wanted to break away but then the One in heaven. He looks at them, He loves them and has them in derision…But confusion and derision seem to be a constant situation that arises there.  You have the crisis, economic crisis in Italy, Spain, Greece and Portugal and so on.  And you had popular parties coming in power creating confusion, right-wing parties creating confusion in many countries.  You have the migration that hit Europe and people don’t know how to handle it,” Evangelides explained.

Bringing the Jerusalem Prayer Breakfast to The Hague is an example of the event’s overall goal.

“The purpose is to gather believers in an area, Jews and Christians in a nation to pray, to pray and ask God to work in their nation and then work on the hearts of their government leaders so that their nation turns towards Israel, to bless Israel and turn towards Jerusalem, to bless Jerusalem,” said co-director and former congresswoman Michele Bachmann.

Organizers have seen tremendous growth since it began just three years ago.

“Literally from Africa to Central America to South America to England to the United States, we’ve seen the Jerusalem Prayer Breakfast spring up and it’s really in accordance with the Word of God, Joel 3, Chapter 1 that all nations will make a choice. Will they be sheep nations or goat nations and it means very clearly will nations bless Israel, will they bless the Jewish people or will they curse Israel and curse Jewish people,” Bachmann explained.

Bachmann says the Jerusalem Prayer Breakfast has come at a unique time in history.

“We’re watching miracles all across the world right now…that God is answering the prayers of the saints, that each of the various nations now opens their hearts, open their minds, open their public policy to shift in favor of Israel and recognizing Jerusalem as Israel’s rightful capital and undivided.”