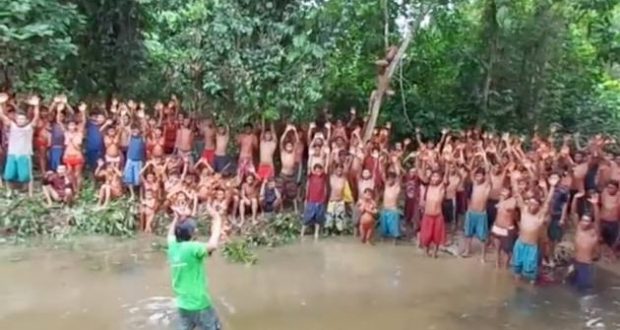 Baptism among the Yanomami.

How the Gospel reached the brutal Amazon “Skull Splitters” tribe

The warriors from the Skull Splitter tribe walked 10 days on foot from a village deep in the Amazon jungle because they wanted to find someone who would tell them about the Son of God.

“They sent out five guys,” says Larry Buckman, a veteran missionary with Renew Outreach. “The old men in the tribe said they were too old to go, so they sent the young guys out.

“Why did they decide to trek 10 days straight north to find somebody? They had no way of knowing there was anybody even up there. Of course the Holy Spirit was leading them.”

The Yanomami group that walked out of the jungle were among the worst Skull Splitters in the entire Amazon, from the Hakoma area, according to Larry. While there were a few Yanomami believers, the Hakoma area was unreached. Fifty-five years earlier, two missionaries named Bob and Steve had attempted to take the gospel to them.

When Bob and Steve first went to the Hakoma area in the Sixties they reported that almost everyone was drugged, they had unsightly green mucous coming out of their noses, and they were vomiting all the time. “At night they would get possessed by demons, they would beat up on their wives and split their heads open with their clubs. 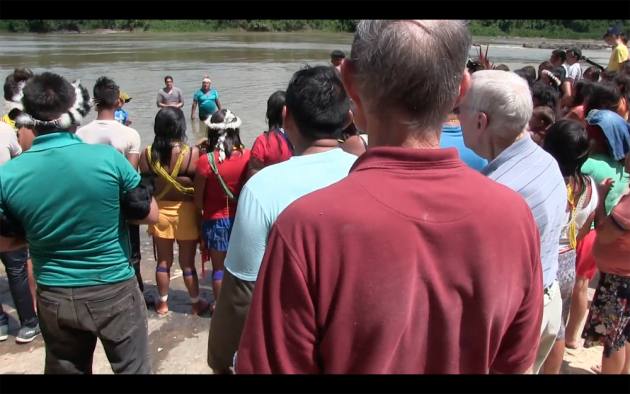 “The tradition was if a girl was going to get married to another man, the oldest man in the tribe had her first. If she let the young man have her first, they beat up on her,” Bob reported to Larry.

“They almost killed us then,” Bob said.

The five warriors arrived at the Palimi-ú River in September, 2012 after their 10-day journey.

They happened to enter a village where two Brazilian Christians, Paul and Bethany had been living for 14 years, learning the language and translating the New Testament.

Remarkably, the five arrived at the height of a celebration by the local church that involved food, dances, the Lord’s Supper and baptisms.

The believers immediately recognized them as the dreaded Skull Splitters, enemies of the village. The warriors were dressed in loincloths, armed with bows and arrows, blowguns and deadly poison darts. The celebratory mood suddenly shifted.

Are they going to kill us? they wondered. Surprisingly, the five got into the baptism line with 32 other new believers.

“I did not ask if they wanted Jesus; I baptized the five along with the others,” Paul recounted.

He and Bethany invited the warriors into their house and spent the next five hours talking to them.

The men explained the reason they had traveled such a distance. “We are tired of living the way we have always lived,” they told Paul and Bethany. “We have been killing people and drugging ourselves. We want to live a different life. Somebody told us about the Son of God. Do you know who that is?”

Paul told them about the Creator God—the Father, Jesus the Savior, and the Holy Spirit, the friend, comforter and guide. “We saw their eyes sparkle with wonder about everything we said,” Paul recounted.

After several days, Paul asked an MAF pilot to fly the men back to their village. “There was only one MAF pilot who dared to go in there,” Larry notes.

The pilot managed to locate a small opening in the jungle, an old gold miner’s airstrip that was very short and overgrown, but it was still a four-day journey through thick jungle for the warriors to reach their home. 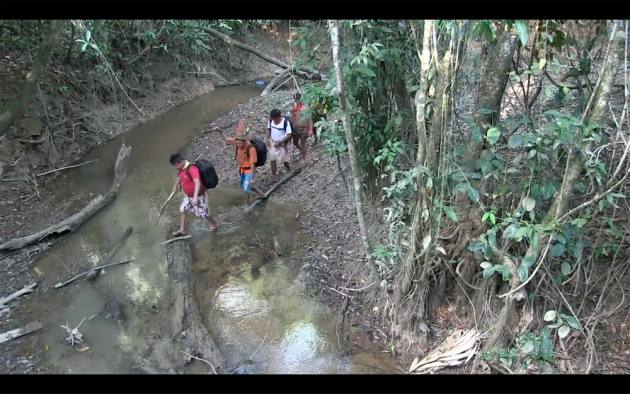 Before they left the men begged Paul and Bethany to come to their village soon and tell their people more about Jesus.

Months went by and God continued to impel their hearts about reaching the Yanomami in the Hakoma area. In early 2013, Paul and Bethany began to plan an expedition to find their village. “It was a time of much prayer seeking the direction of God,” Paul recounted.

A couple months later, they received news that members of the same tribe had exterminated an entire village of other Yanomamis whom they considered to be enemies.

Then in October they learned that 46 gold miners had been killed in that region – also by the same tribe!

“Eighteen days after this massacre, on November 9, 2013, we were inside a small plane going in search of this people,” Paul recounted. “Many said do not go, others called us saying ‘this is suicide,’ ‘they are too dangerous.’”

After two hours in the air, their pilot found the same airstrip. The missionary expedition group included Paul, Bethany, and three other mature Yanomami believers that spoke different languages. “We did not know for sure what awaited us; we were fearful, very afraid, but confident in the care of God.”

The small plane deposited the passengers and left. “As the roar of the airplane engine disappeared on the horizon, fear and dread filled our hearts. We were literally alone, isolated and left in the dense jungle.”

They realized they were in the same place the miners had been killed only a few weeks earlier! The only answer was to turn to God in prayer.

Just as they started to pray, they heard a noise in the woods. “When we raised our heads we saw the most incredible scene. We were surrounded by men, women and children, armed with bows and arrows, blowguns and poison darts, but also rifles, cartridges, watches, tablets, cell phones and a lot of clothes from the miners that they had killed 18 days before us.”

Paul snapped a quick photo with his digital camera, but forgot to turn off the flash.

Interpreting the flash as a hostile sign, the crowd began walking towards the missionaries and lifted their weapons in a menacing fashion. “They took aim. I thought our time had come…” Paul recounted.

Then a lone voice shouted from the midst of the crowd. “Stop! Stop! Today is not a day of death.”

Another cried out, “Do not hurt them. These are the ones who say there is a True Creator.”

Out from the crowd stepped the five warriors that Paul baptized the previous year.

As quickly as the large crowd appeared, they disappeared, leaving the same five warriors who now approached with smiles on their faces. “We saw in their eyes the joy with our arrival,” Paul recounted.

After the tension receded, Paul communicated via satellite to the believers along the Palimi-ú River and two more planeloads arrived, bearing 10 more Yanomami believers.

The five led the new arrivals along a path and after 20 minutes they found a large structure with a crowd waiting for them.

On the afternoon of November 9, 2013, the 15 took turns preaching, teaching, and telling Bible stories, and the people listened with rapt attention about the history of the Creator.

Paul delivered the message that Jesus, the Son of God, was already among the Yanomamis. “Everyone was so stunned by what they heard that they began singing the message back and forth, their traditional way to spread news,” Bethany recalled.

“Night after night people were repenting, sometimes going until 5:00 in the morning. This went on day and night. I answered so many questions and at the end we held another baptism. More than 400 Skull Splitters came to Christ!”

Paul and the other leaders went to a small river nearby and baptized 162 new brothers, then ministered communion, using “the Beijú of cassava and the juice of Açai.”

On November 12th, the team began discussing the idea of ​​planting a church. They had many newly baptized converts, but few mature leaders to stay with them. “We needed to do something, so we choose the five that I had baptized in 2012 as their leaders in the faith,” Paul recounted.

In 2014 the team returned to the village, bringing solar audio bibles and a small solar projector with the JESUS Film in the Chamatari language. Eighteen villages within a 10-day walk were invited to the screening.

Every night they projected the movie JESUS. At the end of the visit they donated the solar projector and the five leaders said they would take the film and show it in surrounding villages.” There was regular follow-up with the believers every year.

Three years later, the film had reached 4,600 people in 21 remote villages. “They report there are now believers in every region, in places where we are not allowed to go,” Bethany noted. “The warriors are doing what we can’t. We are living a true revival in the heart of the jungle!”

The original missionary to the Yanomami in the Hakoma area, Bob, is amazed by what he sees. “I can’t believe what is happening now!” he exclaimed.

He and Steve were asked to serve communion to the new believers, 55 years after they first planted the seeds of the gospel.

“When you see those kind of things you think, Lord, you are so gracious to let us be here and see these things happen,” says Larry Buckman, with Renew Outreach. “These old guys sacrificed everything and they deserved to see it in their lifetime. It is amazing to see how God has transformed that tribe and somehow is protecting those dear men that truck up and down to take the gospel to the next group of people.”

“There are 200 Yanomami villages that we know of. They plan to take the gospel to every one of those 200.”

To learn more about Renew Outreach and their work, go here

To find out more about the JESUS Film Project, go here

Previous: 5 family-friendly shows for October
Next: Conference will address families and the end times