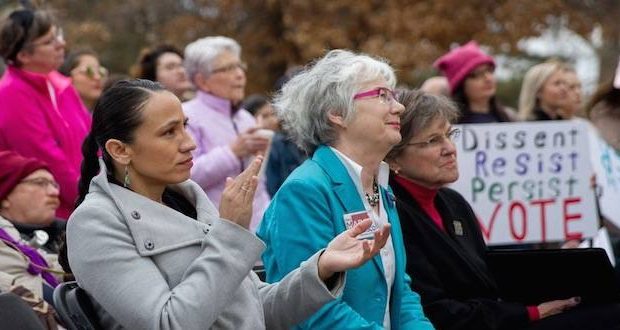 Davids at a rally protesting the 2016 election.

One of the beauties of being involved in politics in smaller media markets is that a wider variety of people can become involved on relatively small budgets. Other benefits are obvious. Candidates need not be beholden to large numbers of special interests in order to run for office and it is easier for reform movements to take hold since smaller groups can impact the electoral process.

Year of the Carpetbagger

Were it not for the Kansas City Star’s brazenly deceitful promotion of her candidacy, it would have been hard for Davids to have even survived her party’s primary. Andrea Ramsey, the party’s initial front runner for the seat dropped out of the race after allegations of sexual harassment surfaced.

That left socialist Brent Welder in a strong position to win, which would have been followed by an almost certain defeat in the general election.

Tom Niermann, a Johnson County moderate was the candidate the campaign of Congressman Kevin Yoder (R) considered to be the biggest threat however he was a distant runner up behind Welder. Enter The Stars PR campaign for Davids.

According to The Star, Davids was the ideal candidate. The editorial board claimed that what swayed them was her articulate presentation and “centrist” positions. Both claims appear to be outright falsehoods, the first of many.

Unstated, but probably more to the point, Davids was the perfect affirmative action trifecta of victimhood. She was a homosexual, a minority and a woman. What The Star didn’t share, indeed, what The Star covered up was the fact that Davids was a carpetbagger occasionally present in Kansas solely for the purpose of running for office.

In its second apologia for Davids written after she won the primary, The Star attempted to legitimize Davids’ candidacy by responding to critiques over her very questionable residence status.

According to The Star, she was a “Johnson County attorney.” Really? According to her filing, she lived on 5th St. in Kansas City, Kansas, but that turned out to be an office building.

How about her mailing address? Not unless she folds up small. The address she listed is a box at a UPS store. Her voting address is her mother’s house in Shawnee. Oh, and she’s still registered to vote in South Dakota also.

Well, what about being an attorney? She does have a law degree doesn’t she? Apparently so, but a search of records indicates that she is not licensed to practice law in Kansas, Missouri, or even South Dakota.

She did run a coffee house in South Dakota, but it went bankrupt leaving her investors holding the bag for the $20,000.00 they lost, so maybe South Dakota barista would be a better description of her occupational status – retired.

The Star’s bong smoke theory that Davids was an articulate centrist also went up in smoke during an interview for a podcast (indeed, virtually any time she opened her mouth) when she essentially indicated that she would shut down ICE, the agency charged with removing criminal aliens from society.

Credit where credit’s due, McClatchy reporter Bryan Lowry broke the story about both the podcast and Davids’ failed business. What’s interesting is that after the story appeared to give a boost to Congressman Yoder, The Star, a McClatchy newspaper actually claimed that the position documented by one of their own reporters did not accurately reflect Davids’ position.

Another example of Davids’ carpetbagger status occurred during the annual Overland Park parade. Virtually every major candidate for office in Johnson County including gubernatorial candidate Kris Kobach and Congressman Yoder attended the parade, but not Sharice. Sharice Davids was in New York City trolling gay bars for donations. Literally.

Indeed, throughout the campaign, candidate Davids has been a ghost. She has repeatedly skipped traditional nonpartisan debates that have existed for decades with one exception; she agreed to attend one sponsored by The Kansas City Star which unbelievably and embarrassingly allowed her to read her answers out of a notebook! Clearly Davids knew the fix was in from the start.

I could go on with a laundry list of The Star’s unethical conduct and the stunning list of reasons Davids is not qualified to hold any public office, but the point is that Kansans (which will be made repeatedly clear in this series) are going to have to become more discerning.

They are going to have to look beyond the slick postcards and deceitful TV ads to find out more about what is becoming a tidal wave of carpetbagging strangers whose only connection to Kansas is that it is a cheap place to run for high office.

Previous: Why Steve West must not win the 15th District
Next: Atonement Lutheran Church to host Thanksgiving