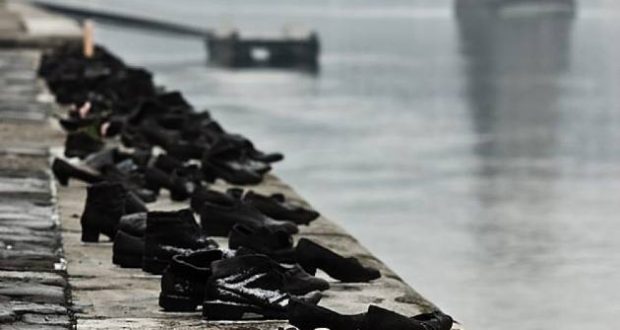 “Shoes on the Danube Promenade” memorial to the Holocaust on the Danube River, erected in 2005. Credit: Nikodem Nijaki/Wikimedia Commons.

Israel to assist in scanning river for Holocaust victims

For the first time since the end of WWII, a search is beginning for Jews killed and thrown into the Danube River in Hungary. The move is at the behest of Interior Minister Aryeh Deri and in coordination with forensic experts from the Israeli emergency organization ZAKA. The recovery team will dive to the bottom of the river to search for the remains of Holocaust victims.

Hungarian Interior Minister Sandor Pinter agreed to allow the provision of special equipment in order to search for remains in the hopes of finding some of the thousands of Jews who were murdered on the banks of the Danube and providing them a proper burial.

Divers will use sonar devices with a range of 500 feet to identify objects below the water.

Approximately 565,000 Hungarian Jews were murdered during the Holocaust, primarily at the Auschwitz death camp in Poland between May and July 1944.

However, in October 1944, as the Nazis sped up the murder of Jews across the continent, thousands of Budapest Jews were murdered along the large river when the Arrow Cross party took power in Hungary. Lined up on the boulevards or promenades along the river, the men, women and children were gunned down and their bodies allowed to fall into the river or dumped there by Nazi sympathizers after their valuables were removed.

It is estimated that in 1944, an average of 14,000 Jews were being slaughtered each day in concentration camps or onslaughts of Jewish neighborhoods in occupied Europe. The Nazis ramped up the killing as Allied forces advanced.

It’s not known if the remains sank and remained in place or were washed down stream.

“I hope that immediately, tomorrow, the righteous men of ZAKA will bestow mercy on these highest of martyrs and bring them to Jewish burial,” Deri said in a video posted to Twitter.