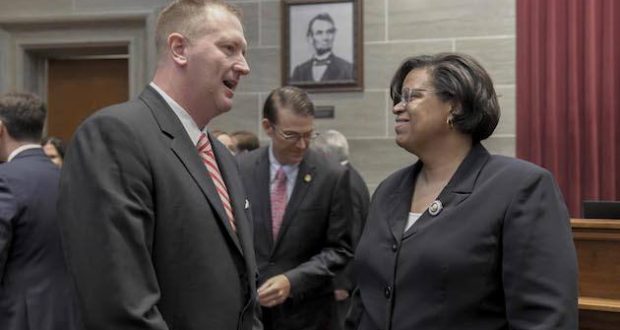 The Missouri House Minority Leader will resign her seat in the State Legislature, effective Sunday.

State Rep. Gail McCann Beatty, D-Kansas City, who’s in her eighth and final year in the House because of term limits, will start Monday as Jackson County’s Director of Assessment.

She says it’s bittersweet for her.

“I’m going to absolutely miss the Legislature but at the same time I think this goes back to appraising, which is what I did before I joined the Legislature,” Beatty says.

Beatty tells Missourinet while other children went to daycare, she followed her father around, helping him measure houses for inspections.

As Assessment Director, Beatty will be responsible for identifying, classifying and assessing all real and personal property in Jackson County.

“I’m the first African-American female to serve as Minority Leader in the House, and I think I was reasonably successful in getting some legislation passed,” says Beatty.

She says the Legislature “didn’t have the appetite to do” that.

Beatty criticized Senate Republicans on the final day of the 2018 session in May, for not approving the ethics bill.

She also said in May that Republican lawmakers approved legislation in 2018 “aimed at rolling back long-held worker protections.”

Despite differences on policies like labor and taxes, Beatty has a good working relationship with House Speaker Todd Richardson, R-Poplar Bluff.

She has praised his open-door policy. They were both elected to the House in 2010.

Leader Beatty was one of the first lawmakers to call for Governor Eric Greitens’ (R) resignation this year.

She says the House’s handling of the Greitens case was bipartisan.

“It became an issue of what’s best for Missouri,” Beatty says. “And quite frankly in order to do the job appropriately, we had to let go that D and R behind our names.”

Beatty says her experience in the Legislature has been rewarding and that she’s made a lot of good friends, Democrats and Republicans.

She thanks everyone who has supported her.

Beatty also tells Missourinet she experienced a “rocky situation”, after she was diagnosed with breast cancer after being elected in November 2010.

She thanks former House Speaker Steve Tilley, R-Perryville, for his support during that time.

Beatty says everything is good now, with her health.

State Rep. Gina Mitten, D-St. Louis, will be the House Minority Leader through the September veto session and through the November general election.

After the November election, the Democratic caucus will meet in Jefferson City to elect new leadership for the 2019-2020 sessions.

Previous: Half of Kansas at high risk for West Nile Virus
Next: When hubby attends church, couples report more happiness