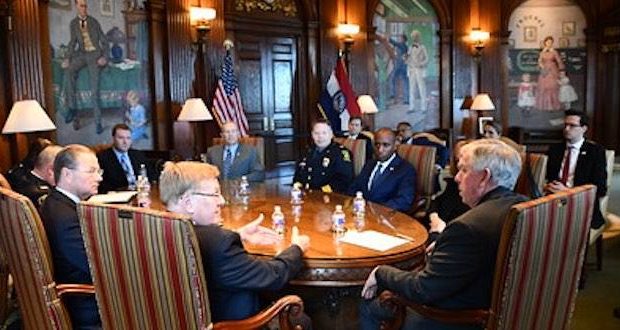 Quinton Lucas says the hardest part of being the Mayor of Kansas City is dealing with the increasing violence in Missouri’s largest city.

Kansas City saw at least three homicides in 24 hours this weekend, bringing the total number of homicides there this year to 141. That’s up from 120 in 2018, with a full month to go.

Mayor Quinton Lucas tweeted this weekend that “we can never accept the violence,” describing it as senseless. He says each victim’s life was important.

Meantime, Mayor Lucas is optimistic about the four meetings that have taken place between Governor Mike Parson and the mayors of Missouri’s four largest cities.

Lucas, a Democrat, met with GOP Governor Parson and the three other mayors last week at the Missouri Capitol in Jefferson City.

Lucas was asked about a tweet sent to him, questioning why he would meet with the Republican governor. Lucas emphasizes this is a bipartisan issue.

“Nobody wants me to sit around and be a proud Democrat and four years from now we still have 140 homicides every year in Kansas City,” Lucas says. “And so, I’ll meet with the governor everyday of the week if we can get this problem solved.”

“What we’re saying is we’re going to make the community safer by making sure that children aren’t walking around with handguns,” Lucas tells Capitol reporters. “That domestic abusers can’t walk around with guns and threaten their past victims and survivors of domestic violence.”

In the meantime, those who study crime point out that the vast majority of urban gun violence is committed by young black men who are in illegal possession of weapons, not law-abiding gun owners in the suburbs. The problem is made worse by easy access to drugs in the state’s largest cities as well as a low high school graduation rate among urban teens.

Other priorities for the governor and mayors include witness protection and relocation and mental health treatment.