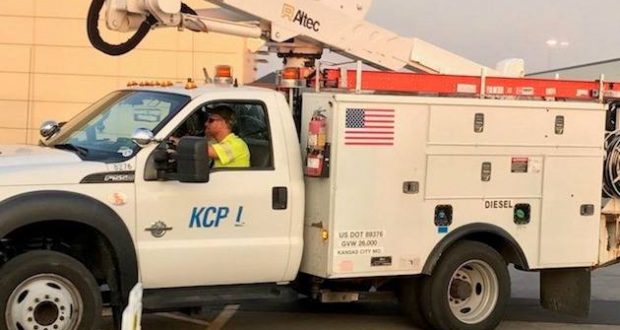 KCTV5 News is reporting that Kansas City Power and Light is sending crews to North Carolina ahead of Hurricane Florence. In addition, local relief organizations are gearing up volunteers and supplies to eventually offer assistance to storm victims.

Kansas City Power & Light says more than 200 contractors have already been sent to Charlotte, NC, as the category-four hurricane churns toward the state. They say the plan is to help the local electric companies restore power as the storm is expected to cause massive power outages across North Carolina, South Carolina and Virginia.

And they’re not the only ones sending help.

The American Red Cross of Kansas City is also headed that way. They left Tuesday with their emergency vans and volunteers.

After the storm hits the organization will hand out food, water and hygiene products. Volunteers are prepared to be in the affected areas for at least three weeks.

Kim Carroll, a leader with the disaster response organization says they already have a team on the ground in North Carolina and more team members are gearing up.

“It’s a pretty quick decision for us to say, ‘We’re going to be ready to go and unless something changes we will be there,’” Carroll said.

The organization is also preparing its mobile medical unit. In it, are hygiene kits, vaccines and medication to help hurricane victims.

Officials say it is hard to anticipate what kind of need there will be and that is why they have to be prepared for just about anything.

“We can keep seeing those patients that need a refill for a diabetic drug, or high blood pressure, or an ear infection that develops for a child during those days, so we’re there to take care of that problem,” Heart to Heart International’s Dan Neal said.

Florence is expected to blow ashore late Thursday or early Friday, before slowing down and dumping up to four feet of rain that could cause devastating flooding.

Heart to Heart has responded to four hurricanes over the last two years, they say they prepare for the worst.

“It’s actually a privilege for them to let us give them the support they need. We see the good in the world those that volunteer,” Carroll said.

The organization says they were in Houston for several months when Hurricane Harvey hit in August of 2017 and are still currently in Puerto Rico. They say they will be in the Carolinas until they are no longer needed.