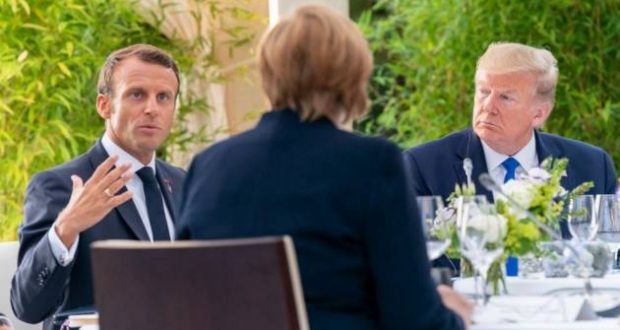 President Donald Trump has secured a major concession from leaders of the Group of Seven after they issued a declaration on Aug. 26 committing to fair trade.  It has been Trump’s central effort on behalf of the American people to rebalance the United States’ global trade relationships.

The victories the president achieved on several levels are in sharp contrast to American and British media reports that characterized the G-7 summit as a failure for Trump. 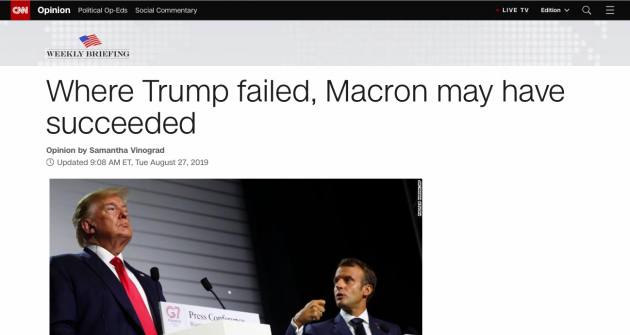 French President Emmanuel Macron released the declaration at the end of a three-day G-7 summit in Biarritz, France. The statement emphasized “great unity” among the leaders and expressed their commitment to “open and fair global trade and the stability of the global economy.” 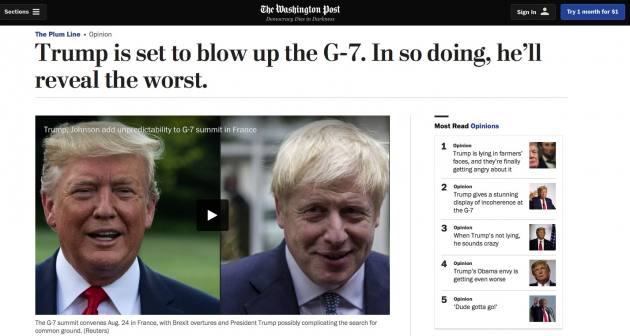 But from CNN to the Washington Post, headlines talked of failure with he Post even saying that Trump would ‘Blow Up” the summit before it even began. The  Post’s coverage remained negative even as the group released statements using Trump’s exact wording regarding unfair trade practices.

American news media headlines have been almost 100% negative on Trump’s performance at the summit but a detailed look at the accomplishments tells a much more different story.

Macron issued a special declaration hours after Trump announced that China is eager to make a deal. The message from China came the day after the White House said the president might have regretted not raising tariffs on China even more. Trump has accused China of employing unfair trade practices, and he imposed several waves of tariffs to force the communist regime to agree to a fair deal.

“I do think that privately these other G-7 leaders were grateful that the United States was again taking the lead,” said James Roberts, a research fellow at the Davis Institute for National Security and Foreign Policy at conservative think tank The Heritage Foundation. “So I think this resolution where the French kind of did acknowledge some of the legitimacy of Donald Trump’s position on trade was good.”

The United States and China are the world’s two largest economies. Trump has been attempting to keep public support for what is a historic moment of America standing up to unfair trade practices which had gone virtually unchallenged by previous presidential administration.

“Sadly, past Administrations have allowed China to get so far ahead of Fair and Balanced Trade that it has become a great burden to the American Taxpayer,” Trump wrote on Twitter on Aug. 23. “As President, I can no longer allow this to happen! In the spirit of achieving Fair Trade, we must Balance this very unfair Trading Relationship.”

Trump noted on Aug. 26 that the United States is either discussing, negotiating, or finalizing trade deals with several key allies, including Canada, Mexico, Japan, and the EU.

Trump and Japanese Prime Minister Shinzo Abe on Aug. 25 announced an agreement, in principle, to a U.S.–Japan trade deal. The measure is expected have a positive impact on roughly half of U.S. agricultural and ranch exports to Japan. The deal will also impact industrial tariffs and digital trade, according to U.S. Trade Representative Robert Lighthizer.

“When we get these deals done, our country will be transformed,” Trump said. “I mean, it will be monetarily transformed. It’s such a difference between the horrible, horrible one-sided deals that we had in the past. And, frankly, past administrations should be ashamed of themselves for allowing that.”

According to Roberts, Trump’s clearing up trade issues with allies can help project the message to China that the United States has a unified front with G-7 leaders. The Group of Seven was formed the 1970s in part to resist the threat from the Soviet Union while ensuring that democratic nations could trade freely and prosper.

“Now we’re all facing this threat from China, so the G-7 proved that it is still relevant,” Roberts said.