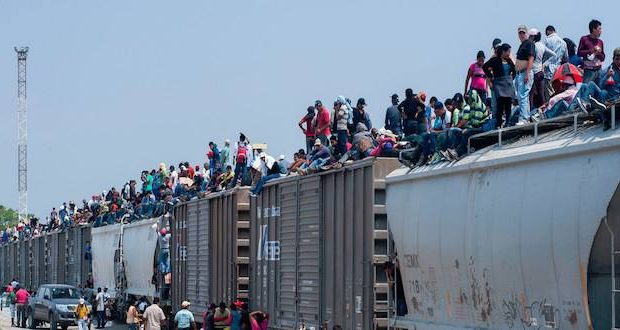 Migrants returning to home countries from Mexico under Trump policy

A new Trump administration policy of having migrants wait in Mexico for asylum is resulting in tens of thousands returning home. The migrants were sent back to Mexico to wait for courts to process their asylum claims under the “Remain in Mexico” policy. That’s according to a new report released by the Department of Homeland Security (DHS).

The administration implemented the Migrant Protection Protocols (MPP), more commonly known as the “Remain in Mexico” policy, at the beginning of the year as an attempt to curb the flow of illegal immigration and prevent fraudulent or non-meritorious cases. The policy sends migrants back to Mexico while they wait for a court to process their claims.

The department said in a recent report assessing the effectiveness of the MPP (pdf) that a “significant proportion” of migrants without meritorious claims that were sent back to Mexico had chosen to abandon their asylum claim.

They said, citing Customs and Border Protection (CBP) numbers, over 55,000 immigrants had been sent to Mexico under the MPP but there are currently only about 20,000 people that are sheltered in northern Mexico, near the US border, waiting to enter the United States.

This has led the department to conclude that “aliens without meritorious claims — which no longer constitute a free ticket into the United States — are beginning to voluntarily return home.”

The MPP assessment, released on Oct. 28, found that the policy had demonstrated operational effectiveness by reducing the number of illegal immigrant apprehensions and restoring integrity to the immigration system.

“Although MPP is one among many tools that DHS has employed in response to the border crisis, DHS has observed a connection between MPP implementation and decreasing enforcement actions at the border — including a rapid and substantial decline in apprehensions in those areas where the most amenable aliens have been processed and returned to Mexico pursuant to MPP,” the department stated.

The department also said the policy is helping migrants with meritorious claims by granting relief or protection within months as opposed to years.

“The Migrant Protection Protocols has been a key component to the success we have had addressing the crisis,” said Acting Secretary Kevin McAleenan, while announcing the expansion of the policy in Eagle Pass, Texas.

“We are confident in the program’s integrity and ability to adjudicate asylum claims quickly and with all due process. We have already seen individuals granted asylum, and many more fraudulent or non-meritorious cases closed,” he continued.

In May, a federal appeals court allowed the Trump administration policy to proceed.

Meanwhile in August, dozens of Senate Democrats sent a letter (pdf) to Secretary of State Mike Pompeo and McAleenan calling for the end of the policy.

“Not only does this policy do nothing to protect either migrants or U.S. interests, but we have grave concerns about its legality, recent efforts to expand it, and the dangerous conditions it forces asylum seekers to endure while waiting for their cases to be heard,” the senators stated.

The Trump administration had ramped up efforts in the past year to address the influx of illegal immigrants crossing into the United States and restore integrity to the immigration system. One of the administration’s top priorities is to end loopholes resulting from the current “catch and release” policy, where migrants are released into the interior of the country as they await a court hearing, often never to be seen again.

Previous: Church bridges racial gap in Quindaro neighborhood of Kansas City, Kan.
Next: She was the ‘Moses of her people’: film on the life of Harriet Tubman opens in theaters