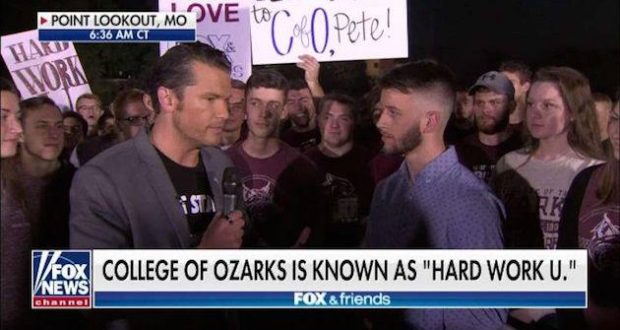 A House committee early this week will consider whether to allow College of the Ozarks in Point Lookout, Mo., to hire police officers for on-campus security.

The Private College Campus Protection Act (House Bill 1282) stalled in the legislature last year, according to Missourinet. That bill would have allowed any of Missouri’s private college or universities to employ police officers, but it since has been revised to apply only to College of the Ozarks.

Kurt McDonald, the college’s operation head for crisis management, testified before the legislature a year ago, explaining that the bill is all about response time. He noted that Point Lookout is about 30 minutes away from Taney County sheriff’s deputies in Forsyth. He testified in February that the bill is needed because of what he calls the potential threat of an active shooter and emphasized his respect for Taney County sheriff’s deputies.

“I don’t want to be the person that calls a parent in the loss of a student, and this is a way that we can put another level of protection by being our own first responders,” McDonald testified in 2019.

Bill supporters say it would enhance campus safety and would require a professionalism for College of the Ozarks campus security. Under the bill, officers would have to take an oath of office and finish police training to obtain a peace officer license.

The vision of College of the Ozarks is to develop citizens of Christ-like character who are well-educated, hard-working and patriotic, according to its website.