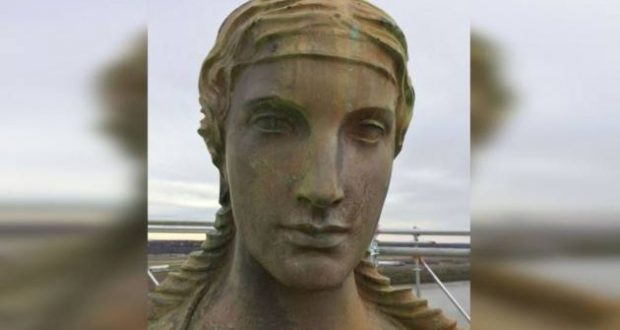 Ceres before the restoration.

A Missouri lawmaker is not happy that a statue of Ceres, the Roman god of agriculture, is being returned to the dome of the capitol in Jefferson City after restoration. Rep. Mike Moon, a Republican from Ash Grove, expressed his concern in a letter to Gov. Mike Parson, according to the St. Louis Post-Dispatch.

“We serve a mighty God and we have need for no other god(s),” the letter said. “If we chose to erect a statue of Jesus on, or in, some state property, there would likely be an outcry from those who disagree with our choice. Those who would oppose the statue of Jesus are the same who would argue in support of placing a false god on our capitol’s dome. Should we not stand firm in our beliefs as well by refusing to honor a pagan god?”

VIDEO OF THE STATUE’S REMOVAL:

The governor last week participated in the public unveiling of the statue after a yearlong, $400,000 makeover designed to return Ceres to her original luster. About 100 people showed up for the event.

“And she’s all dressed up, she’s pretty to go back up on top of our state capitol and represent all of us,” Parson told Missourinet. “It’s kind of a special day to be part of the unveiling.”

The statue was installed on Oct. 29, 1924 and has remained there with the exception of her recent restoration work.

Dana Rademan Miller, the clerk of the Missouri House of Representatives and a member of the commission that oversees the capitol, said a core responsibility of the panel is to ensure the building is preserved in keeping with how it was originally designed.

NEWS ON THE RESTORATION OF THE CAPITOL:

“Ceres is a symbol representing our state’s strong agricultural economy and the majority of individuals I’ve spoken to are excited about the restoration and her return to the capitol,” he said.

The restoration of Ceres is part of a $50 million restoration of the exterior of the capitol building that is expected to be completed in early 2020. The sculpture depicts a 10-foot, 4-inch-tall Ceres holding a bundle of grain in her left arm to signify the importance of agriculture to Missouri.

The interior has also recently undergone restoration in selected areas.