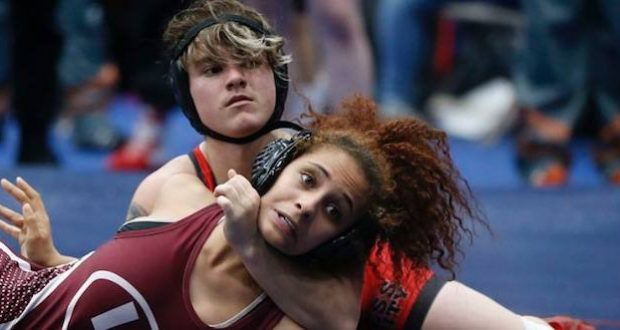 A biological male athlete competes as a transgender woman in a girls wrestling match.

Many people believe that transgender athletes have an unfair advantage when competing in girls’ sports. Missouri is one of five states where lawmakers are considering legislation that would regulate a biological male’s participation in women’s sports.

Cindy O’Laughlin, a Republican senator from northeast Missouri, is pushing for a resolution that would ban student-athletes from competing in events as the gender they identify with, according to KMOV-TV in St. Louis. If passed, the amendment to the state constitution would require athletes to participate in events based on the gender on their birth certificate.

READ: Female athletes suing over male participation in their sports

“I started seeing in the news where, across the country, you had women who are being beaten by biologically born men in big competitions,” O’Laughlin said. “And I thought, ‘I just don’t think people think that’s right’.”

Currently, the Missouri State High School Activities Association deals with gender dysphoria (the psychological term for a person who chooses to believe they are of an opposite gender) for  issues in extracurricular activities on a case-by-case basis. A policy statement in the state handbook that went into effect in 2012 mirrors a policy enacted by the NCAA.

If the resolution restricting transgender athletes passes, an amendment to the Missouri state constitution would need be approved by voters. “So it’s not something that I’m determining solely by myself or someone else,” O’Laughlin said. “It will be on the ballot for people to vote on.”

SJR50, if passed, would put the issue to a statewide vote, asking to amend Section A., Article III, of the Missouri Constitution. The new language would clarify the term “biological sex” as the “physical condition of being male or female, identified at birth by a person’s anatomy and indicated on their birth certificate.”

READ: Missouri Legislature to take up transgender issue this session

The resolution would state, “Students participating in any event or activity, that is a single-gender event, organized by any statewide activity association shall be required to participate in the event corresponding to the student’s biological sex.”

Caroline Gibbs of the Transgender Institute vows to fight the proposal, arguing that hormone treatments can create a level playing field. “It’s absolutely unfair to deny someone a right that by all accounts, physically and medically, they should be participating in,” she said.

Female athletes across the nation have sued their school districts and state sports associations saying that transgender athletes put women at a disadvantage and negate federal protections for women in sports.

On Facebook, O’Laughlin said, “Everyone deserves respect including persons with gender issues. But this does not mean we change foundational truths to accommodate them.”

Previous: Technology now powering persecution of Christians around the world
Next: Pentagon gets request to build 300 miles of border security wall