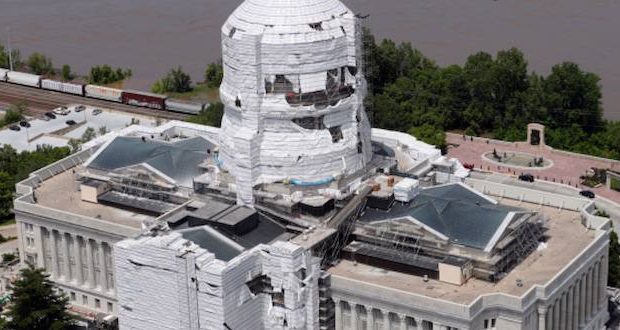 Governor Parson reports on storm recovery and urges Missourians to be prepared to take protective actions over the Memorial Day holiday weekend in which severe weather and flooding continue across the state.

The National Weather Service Kansas City Office in Pleasant Hill, Mo. expects up to three inches of rain in northwest Missouri over the weekend, resulting in a Flash Flood Watch. The office is also calling for a total of 4 to 6 inches of rainfall for parts of Missouri over the next seven days. This is now expected to push flooded rivers to higher levels than previously forecast

In Jefferson City, a team of volunteer engineers, architects, building inspectors, and other trained professionals Friday began assessing the exteriors of about 500 homes and buildings believed to have sustained damage from the massive tornado. Storm recovery efforts include determining which are safe and which should be evacuated.

On Saturday, SEMA’s Structural Assessment and Visual Evaluation (S.A.V.E.) Coalition evaluated about 200 additional structures in Cole County that are reported to have been damaged.

Of the first 321 structures reviewed Friday, the S.A.V.E. Coalition reported the following:

Inspectors look for external structural damage, such as partially collapsed buildings, buildings moved off their foundations, leaning buildings, damage to supports, falling hazards from chimneys or walls, or other hazards like gas leaks or downed power lines.

“As I traveled the state yesterday and observed the devastation from Wednesday night storms, I saw people hard at work and lending a hand everywhere I went. Missouri utilities and businesses have brought on extra workers and are working extended shifts; public service workers are doing yeoman’s work, and volunteers are making a difference. The results are clear. Missouri is making strong progress in our recovery from this challenge, ” Parson said.

Previous: War-weary Syrians eager to get Bibles on front lines
Next: Graham asks Christians to pray for President June 2