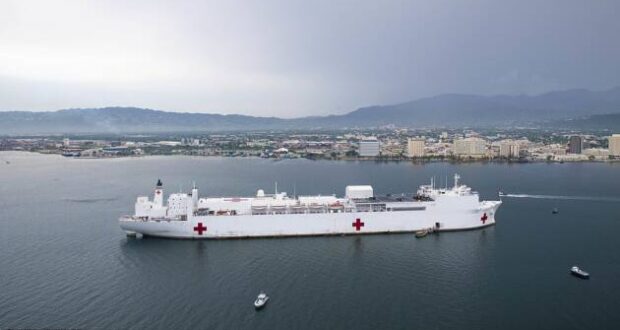 The U.S. Navy is deploying two hospital ships on the orders of President Trump. During the remainder of the coronavirus crisis, the ships will be moored off Los Angeles and New York City.

The announcement that the U.S.N.S. Mercy was being deployed by the Navy came Sunday in a statement by California Gov. Gavin Newsom. In making the announcement, Newsom thanked the President for his quick response.  The USNS Mercy  will provide additional hospital beds and urgent support for the state’s medical facilities which are feeling pressure from a growing number of coronavirus patients.

The Mercy is the largest hospital ship in the world.

READ: Media was first to label virus the Chinese coronavirus

President Trump is ordering the Navy to deploy the USNS Comfort to the New York City area. New York State has the highest number of coronavirus cases in the nation at over 20,100.

Both states have seen exploding numbers of coronavirus cases and have issued lockdown orders to stop the spread of the virus.

In addition, both Cuomo and Newsom are calling out young people who are disregarding the social distance warnings. Newsom blasted message to his state’s youth. During a COVID-19 response update the California official made the following remarks:

“Just assume that you potentially are contagious and act accordingly. Socially distance yourself from others, just use common sense. Be a good neighbor, be a good citizen. To the young people who are still out there on the beaches thinking this is a party — it’s time to grow up, it’s time to wake up.”

Newsome’s scolding was in response to massive crowds reportedly continued to flock to beaches and parks despite an ongoing shelter-in-place order. Beachgoers in Huntington Beach eventually went home as National Guard troops arrived.

In San Diego beaches have been closed on orders of that city’s mayor with a $1,000 fine for any individual to who violates the emergency order.