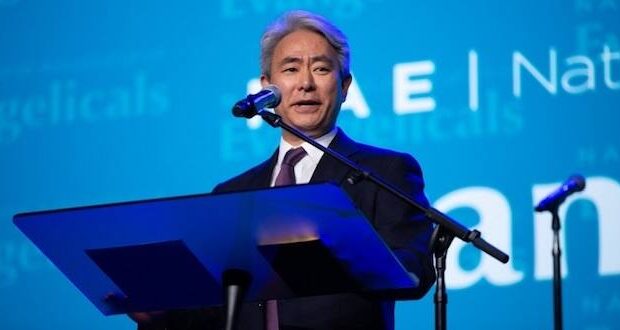 Virginia Pastor Walter Kim recently was inaugurated as the first minority president of the National Association of Evangelicals. One of his goals is to address what he calls an “identity crisis” in a politically divided culture.

“By identity crisis, I certainly mean this discourse that seems to be happening right now and our inability to engage meaningfully and charitably in conversation with one another,” he said. “It’s an opportunity for us to remember the essentials of the good news to come together in our belief that we as evangelicals are not a political movement. We’re not a social movement. We are a spiritual movement. In the public discourse right now, that often is forgotten, where evangelicalism is often presented as a political movement or a cultural enclave.”

VIDEO: Kim talks about what it means to be an evangelical

Kim replaces the association’s longtime president Leith Anderson, who announced his retirement last year after serving as the NAE head since 2006. NAE is an association of churches from over 40 denominations with millions of constituents along with dozens of schools and nonprofits worldwide.

Kim was born in New York City to a Korean immigrant family. For the past three years, he has served as the pastor of Trinity Presbyterian Church in Charlottesville, Va., a congregation of about 1,500. He has served on the NAE board since 2013.

Kim said he wants to focus on spiritual renewal and reconciliation because he is concerned about today’s politically polarized society where people on opposite sides of the spectrum find it increasingly difficult to engage with each other in meaningful ways even if they are fellow Christians. Kim is hopeful that things will get better.

“The gospel was introduced in a world of great chaos when Jesus came,” he said. “The modern evangelical movement when it arose in Britain and in America in the 18th century, there was also tremendous upheaval. And in all those moments since then, certainly in American evangelicalism, every time that there was a period of tremendous upheaval, where it seemed like evangelicalism might be seeing its final days, there was a resurgence that saw God work in fresh ways. And I’m expecting that again.”