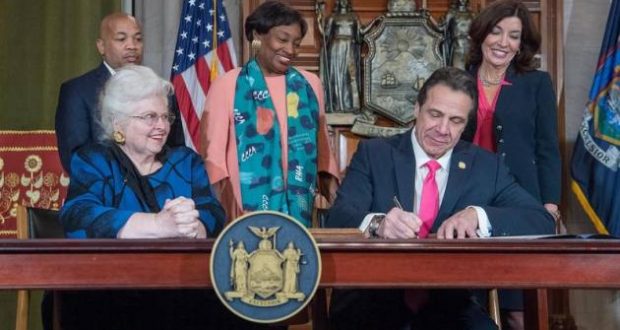 New York Governor Andrew Cuomo has signed into law a measure that allows mothers to abort their unborn child up until birth. He then celebrated the signing by directing the spire of the One World Trade Center and other buildings in the city to be lit up in pink.

The Reproductive Health Act (RHA) passed the Democrat-dominated Senate on Jan. 22, with a vote of 38-24. Moments after the bill passed, the gallery erupted in applause for about 20 seconds before a pro-life protestor could be heard yelling, “May almighty God have mercy on the state of New York.”

The legislation also passed the state assembly that same day with a 92-47 vote. Cuomo, a Democrat, signed the bill shortly after.

Republicans, who led the state’s Senate for much of the last century, blocked the bill for consideration on the floor for years. However, after Democrats took control of the state government in the 2018 elections, the governor made it a priority to pass the measure. 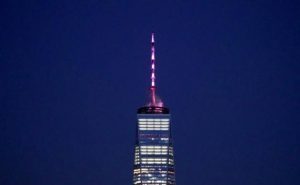 The new law allows abortion after the 24-week mark if a doctor acting on “good faith” determines that the abortion is necessary to protect the life or health of the mother. The term “health” was not defined in the new law.

The RHA also permits midwives and nurse practitioners to carry out medication abortions and allows physician assistants to perform some surgical abortions.

Cuomo called the passing of the bill a “historic victory for New Yorkers and for our progressive values.” He added that he was afraid that the federal government could soon overturn the Supreme Court decision of Roe v. Wade, particularly after Justice Brett Kavanaugh was appointed to the high court, making the bench more conservative.

“I have no doubt that Gorsuch is going to reverse Roe v. Wade. So what do we do? Protect ourselves. Pass a law that is a prophylactic to federal action,” Cuomo said earlier this month at a rally.

He then promised to legalize abortion within the first 30 days of the new session, according to a statement.

Cuomo has been a long-time pro-choice advocate. In 2014, he called people with pro-life views “extreme conservatives” and added that “they have no place in the state of New York,” reported the Washington Examiner.

The new law garnered support from many Democrats and pro-choice advocates, who expressed their delight in a statement on Jan. 22. Along with the One World Trade Center, Cuomo also ordered the Governor Mario M. Cuomo Bridge, the Kosciuszko Bridge and the Alfred E. Smith Building in Albany to be lit pink.

Meanwhile, Republicans said the law would increase late-term abortions and make it harder to prosecute suspects who attack pregnant women, according to the Wall Street Journal.

“A baby inside its mother is not an inanimate object—it’s a life,”  Republican Senator Daphne Jordan said. “Think of what you’re allowing to be tossed away with this vote.”

Pro-life group New York State Right to Life called the bill “extreme,” saying that it was sold to the public as a mere update on existing law.

“RHA will expand abortion past 24 weeks through birth, make abortion a “fundamental right,” and prohibit all limits, which Roe vs. Wade did not do,” the group said in a statement.

The passing of the New York bill comes on the same day a federal judge in Iowa ruled that the “heartbeat” abortion law, which would have banned nearly all abortions after babies in the womb had a detectable heartbeat, was unconstitutional.