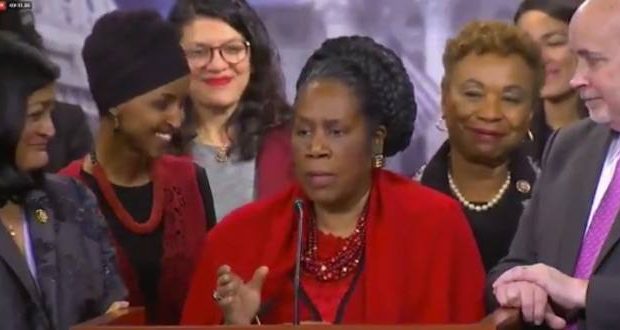 Congresswoman Ihan Omar joins other Democrat congressional members in laughing as deaths of 4,000 American soldiers is discussed in press conference.

Congresswoman Ilhan Omar, is facing backlash after claiming the killing of Iran’s top terrorist has given her PTSD.

The Democrat from Minnesota made the stunning remarks during a news conference with other Democrats on Wednesday, at which she also said she “felt ill” because of “everything that is taking place” in the Middle East — a reference to the killing of a top Iranian General and the subsequent response of Iran.

“I find myself being stricken with PTSD,” she said. “And I find peace knowing that I serve with great advocates for peace and people who have shown courage against war.”

Congressman Jim Banks, a Republican from Indiana served in Afghanistan as a member of the Navy. The veteran shot back on behalf of other military veterans Wednesday to her claims of post-traumatic stress disorder.

Rep. Ilhan Omar complained she’s “stricken with PTSD” because of recent events in the Middle East.

This is a disgrace and offensive to our nation’s veterans who really do have PTSD after putting their life on the line to keep America safe. pic.twitter.com/twhZDuUDu0

Banks called Omar’s comments a “disgrace,” saying the remarks were “offensive to our nation’s veterans who really do have PTSD after putting their life on the line to keep America safe.”

Omar had remained silent and apparently suffered no ill consequences after Spc. Henry Mayfield Jr., 23, of Evergreen Park, Ill., was killed on Sunday during a morning attack on a Kenya Defense Forces military base in Manda Bay.

Banks also posted video of Omar Wednesday evening, that showed her and other Democrats giggling in the background as their colleague, U.S. Rep. Sheila Jackson Lee, D-Texas, spoke to reporters about the more than 4,000 U.S. service members killed in Iraq over the years.

“Your words and actions at today’s press conference reveal your feelings toward our soldiers serving abroad and the video speaks for itself,” Banks wrote, including a video of the news conference shared by Rep. Jody Hice, R-Ga.