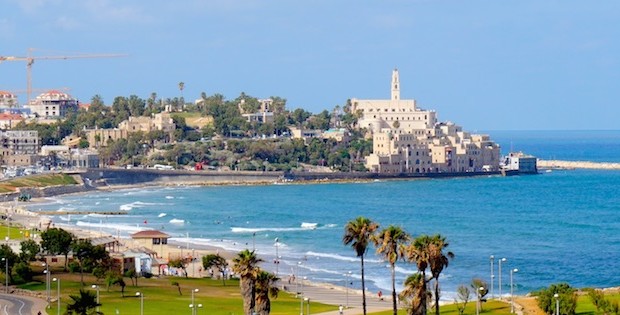 Jaffa is the most ancient continuously inhabited city in Israel. For five thousand years, people have called it home. Jonah embarked on his adventure from these waters. Today, cranes soar over its old neighborhoods as new buildings are nestled in between old.

Part 2: Our Family Trip to Israel

Sharing the Wonder of the Holy Land with a New Generation! 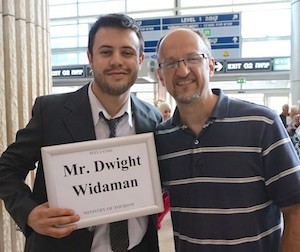 The captain announces, “Welcome to Israel!” as our US Airways jet touches down, eliciting applause from first class to economy. Travelers will tell you it happens every time a plane returns to Israel. We’ve never seen this type of 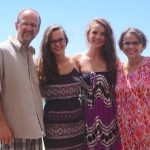 exuberant outburst landing in any other part of the world. The excitement is palpable, and it mirrors what we find inside Israel’s Ben Gurion International Airport, located a dozen miles southeast of Tel Aviv, where my wife Anita and our daughters Hannah (20) and Emma (18) began—and ended—our family trip to Israel.

Upon our arrival we easily navigated immigration and then, just like in a movie, a representative of the Ministry of Tourism waited for us, holding a placard with our name. He made sure we were comfortable while our tour guide, Mr. Moshe Henzel and our official escort from the Ministry of Tourism Mr. Zvika Abramovitch, battled late afternoon rush hour to meet us.

Don’t miss other parts of our feature story!

Part 1 Why a Journey to Israel is Right for You

Part 3 In the Footsteps of Jesus

At the airport our family joined a throng of people from around the world, many of whom were on a spiritual journey, waiting to connect with tour guides, friends or family. Anita said she had the sense that we were “all in this together,” like one big family on an epic adventure. It’s true! Its common during Israeli tours to run into friendly brothers and sisters in Christ numerous times as itineraries coincide. 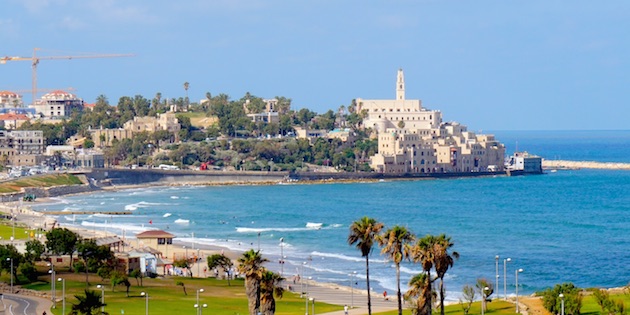 Jaffa is the most ancient continuously inhabited city in Israel. For five thousand years, people have called it home. Jonah embarked on his adventure from these waters. Today, cranes soar over its old neighborhoods as new buildings are nestled in between old.

Our transportation arrived and, after a 40-minute drive, Zvika delivered us to our Tel-Aviv beachfront hotel—The Dan Panorama. It was 5:30 in the afternoon, but still 9:30 a.m. in Kansas City. Settling into our rooms, we opened the windows to the sounds of beach volleyball and the Mediterranean’s waves lapping the beach below. The cool sea breeze acted like an invigorating balm and we were ready to explore. Well, maybe not all of us. Mom and Dad seemed to have the most energy after the 18-hour flight. 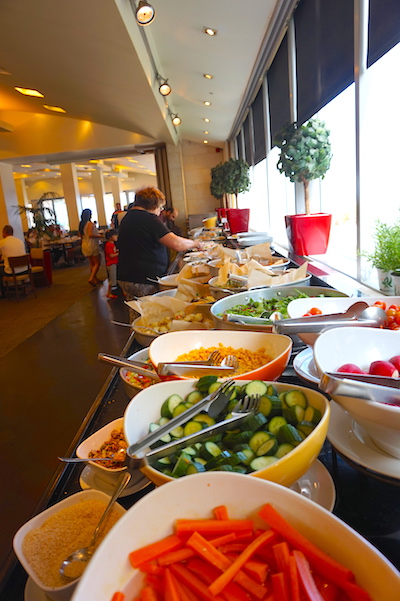 Breakfast at Israeli hotels always mean the largest buffets of fresh food you have ever encountered. At Tel-Aviv’s Dan Panorama it is no exception. Most food that Israeli’s eat is grown locally with he exception of most beef and grain which require too much land so are imported.

Moshe led us on a brisk, twilight history tour through the famous 1930s “White City”—built in the International Bauhaus style. After admiring the famous outdoor Carmel Market we enjoyed Shenkin Street, one of the city’s hippest avenues, passing dozens of small restaurants, cafés and cool shops. For our 9 p.m. dinner (late for us but not for Israelis!) we opted to walk to the port city of Yafo (Jaffa of Jonah fame) for shawarma–an Arabic dish of fresh vegetables and lamb or chicken wrapped in Armenian flatbread.

Our stomachs full, and having “explored” more than our daughters would have preferred that evening, we got a good night sleep and were ready to hit the road, but not until after breakfast. A normal breakfast at Dan Panorama Hotel is anything but normal. It is extravagant and fresh, featuring every fruit and vegetable, fish and cheese one could think of, plus a wide variety of bread and pastries. Although we were headed out of Tel Aviv, it was only temporary as our itinerary called for our return at the end of the tour. More on that later.

Along an Ancient Coast 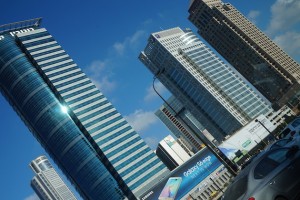 Israel is an ever expanding landscape of skyscrapers. Israel has one of the world’s strongest economies as it exports technology and the latest inventions.

We left the hotel and headed north along a six-lane freeway as each huge city blended into one another, their skylines soaring across Israel’s ever-expanding metropolises. There is so much construction these days that Israelis joke that the crane (as in construction crane) is Israel’s new national bird. The cities of Tel-Aviv, Jerusalem, Haifa, Be’er Sheva and dozens of other metros are being transformed at a pace not seen since the 1930s.

Founded by Herod the Great, Caesarea was a major Mediterranean port and urban center where Acts 10 records that Cornelius was baptized. Today 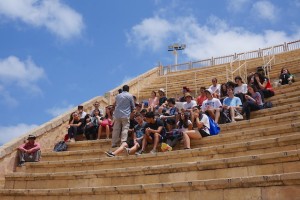 Israeli school kids sit in the amphitheater stands during a field trip to Caesarea. Israel dedicates itself to instructing its children on the history of the land God gave to the Jewish people 5,000 years ago.

it’s part of the National Park system, which includes both an ancient hippodrome, a 4,000-seat amphitheater still used for plays and symphonies, and the city center with its main street and ruins. Herod spared no expense in Caesarea. The massive pink granite columns were shipped from Egypt. His Palace jutted into the sea and boasted a pool that would rival the grandeur of the best resorts. 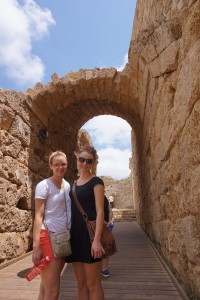 Hannah and Emma enter the Caesarean amphitheater. It’s one of the ancient Roman city’s most impressive sites.

The hippodrome is impressive and is where citizens viewed chariot races, gladiator combat and later, quite possibly, the martyrdom of Christians. Guests who enter the structure, should look for the dedication stone honoring Pontius Pilate. It wasn’t until this stone was discovered that some Bible doubters finally believed Pilate even existed.

The area is one of Israel’s most excavated areas, and there’s much to enjoy. No need to go to Rome to see an aqueduct, visitors will find a magnificent example nearby.

Next on our stop was Acre or “Akko.” Paul visited the city (Acts 2:17) and it served as a fortified port city during the Crusader era. Today visitors consider it a “wow” experience as they go “underground” to tour the Knights Halls and a secret Templar Tunnel that connected the crusaders to the harbor. It was the very last “hold out” of the crusaders before the land was lost to the Saladin (Salah a-Din). 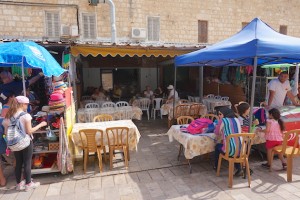 Aladdin’s Restaurant in Caesarea is in a busy courtyard frequented by many tourists and locals looking for good food. Here Fade sells ice cream under a blue tent.

Amazingly, we did all this before a late lunch. Moshe and Zvika convinced us that the best hummus to be found in Israel was at the Alladin Restaurant. Like 99 percent of restaurants in Israel (they don’t embrace chains), it’s a family operation. We found it crossing a busy pedestrian courtyard and were greeted by the Muslim owner and his family, who served up a huge spread for little money. 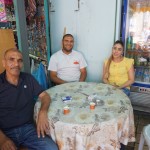 Owner Mr. Salh, with son Fade and daughter Walaa. The Muslim family runs Aladdin’s Restaurant in Caesarea. Our guide Moshe said it has the best falafel in all of Israel.

While Tel-Aviv is a gleaming metropolis and Jerusalem a subdued holy city, Haifa is, well, a little quirky! It’s called the Israeli version of San Francisco–complete with lush landscape, temperate climate and curvy hillside roads—all along the turquoise Mediterranean. As the world headquarters of the Bahá’í faith, which stresses spiritual unity of all faiths and people, the city has benefited from this peaceful religion of co-existence. The centerpiece is the shrine and “Hanging Gardens” that sweep down the western slopes of Mt. Carmel. It was a must stop for Anita and provided a stunning family photo. 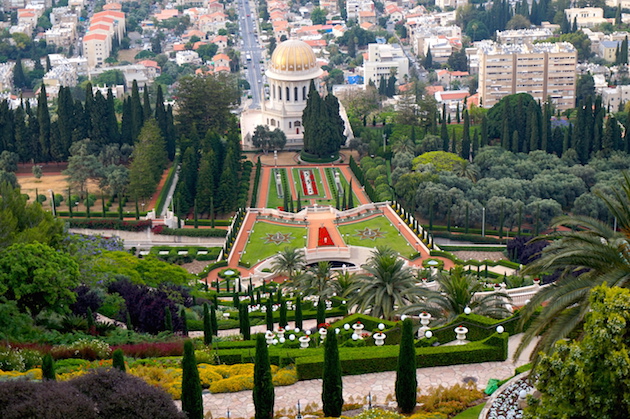 Haifa’s lush landscape, temperate climate and situation on the Mediterranean has earned it the nickname “San Francisco” of Israel. Here the Baha’i Temple overlooks the German Colony and the port.

We checked into the historic Colony Hotel, situated in the middle of the German Colony. Located on a boulevard, the hotel’s al fresco dining, and those of the local cafes, provides a good vantage for 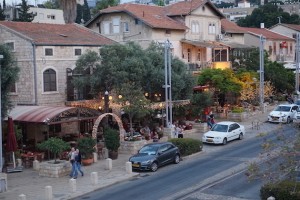 Across the street from the Colony Hotel where we stayed, quaint and artsy cafes line the street.

people watching. They also afford a perfect evening view of the Bahá’í gardens, which seem to stretch down and touch the edge of the neighborhood in the golden setting sun.

The next morning we headed to the Galilee and followed in the footsteps of Jesus. Read about that in Part 3.

[Editor’s Note: Dwight and Anita Widaman and their family toured Israel earlier in the summer. Share their adventures this month and don’t forget to check out the photo collection!]