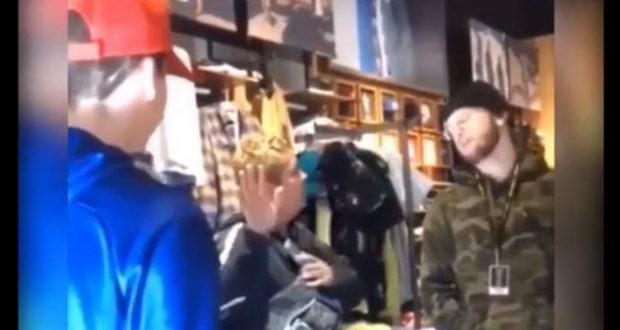 An Overland Park man has lost his job after greeting a 14-year old teen with expletives as the teen entered the Oak Park Mall store wearing a “Make America Great Again hat.” The Vans shoe store employee was fired after he cursed at the young customer. The incident is one of thousands across the country as individuals regularly attack conservatives and Trump supporters for their political beliefs.

The unidentified employee seemingly said “f–k you” to the teen as he appeared to be shopping with his family, an encounter that was filmed and uploaded to social media.

“He did nothing to you — what did you say to my son? To my 14-year-old son?” an unidentified woman who is thought to be the boy’s mother asked the employee in the video. The worker didn’t deny he was the source of the comment.

“I’m sure he’s heard it before,” the employee quipped to the woman, who headed to another area of the store in search of a manager.

“My son walked into this store. That gentleman [appearing to point at the employee] cursed and told him, ‘Take off your hat,'” the woman told another Vans employee. “He said nothing to him, 14-year-old child, then he said, ‘F you’ to my son. My son said nothing to him, did nothing.”

In a statement Vans confirmed that the employee involved in the interaction “is no longer with the company,” and added the company’s “primary focus is to provide the best customer service experience.”

“The actions and comments from one employee in our Oak Park location are in contrast with our company’s values and belief in personal expression,” the statement continued.