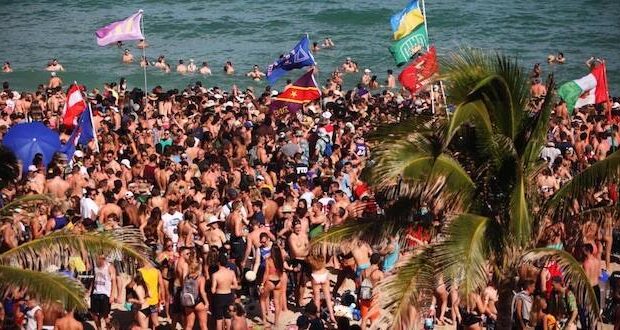 CBS News is reporting that those partying college students seen on Florida beaches during spring break last week are now testing positive for their stupidity.  As of Monday night, five students from the University of Tampa have tested positive for coronavirus. Health experts say that thousands of others could also now be infected.

Those students traveled with hundreds of others from the school for spring break.  Instagram videos of college spring-breakers drunk on the beach and taking shots from each other’s butt were condemned across the nation but especially by other college students.

The news is sobering to officials trying to stop the nationwide spread.

“University of Tampa announced on Friday that it learned that one student, who resides off-campus, tested positive for the virus. Just a day later, the school confirmed that five students, who were part of a larger group traveling together during spring break, had tested positive,” reports CBS. More students are expected to test positive as results come in from medical facilities.

President Trump and governors across the country continue to stress the importance of physical distancing and the following of CDC guidelines to reduce the spread of the contagion. Even while the president gets high marks from Americans for his handling of the crisis, many people across the country are still ignoring that warning, according to CBS.

Spring-breakers seen in a viral video posted by CBS News downplayed catching the deadly virus while partying in Miami.

“If I get corona, I get corona. At the end of the day, I'm not gonna let it stop me from partying”: Spring breakers are still flocking to Miami, despite coronavirus warnings. https://t.co/KoYKI8zNDH pic.twitter.com/rfPfea1LrC

Brady Sluder, a student from Ohio and one of the young people in the video, said, “whatever happens happens” — showing total disregard for warnings from medical and government officials. He’s since apologized but the damage may already be done.

“If I get corona, I get corona,” Sluder said. “At the end of the day, I’m not going to let it stop me from partying. I’ve been waiting, we’ve been waiting for Miami spring break for a while. About two months we’ve had this trip planned, two, three months, and we’re just out here to having a good time.”

Since that week, more Florida beaches have been shut down but many say it’s not enough if the curve is to be flattened and the country is to miss the greatest threat.

Officials say the goal of flattening the curve is to prevent a huge spike in cases that overwhelms the ability hospitals to help them all, and to spread out the number of patients out over time. White House coronavirus response coordinator Dr. Deborah Birx said millennials are crucial in flattening the curve.

Spring break students and others at high risk

“We know that we have a large group of millennials between 25 and almost 40. They are really key to this. They’re a social group. So that [gatherings of] no more than 10 is very much focused on them to really say, even if you’re home, don’t have gatherings more than 10,” Birx told “CBS Evening News” anchor Norah O’Donnell.

According to CBS, “Many millennials and even younger people might be ignoring these social distancing warnings because they think coronavirus won’t affect them — but they’re wrong. While patients age 60 or older or those with underlying health issues face the highest risk of death from the virus, younger people are also getting seriously ill. Nearly one-third of confirmed cases in the U.S., and 20% of those hospitalized, were between the ages 20 and 44, according to CDC data released last week.”

The news outlet reports that younger adults actually accounted for a “large portion of the hospitalizations. Spring-breakers who did not practice social distancing could have done more damage than they thought.”