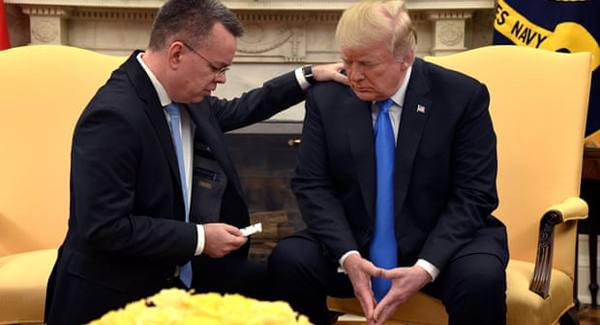 Pastor Andrew Brunson returned to the United States Saturday after two years of imprisonment and detention in Turkey, meeting with President Trump and taking the opportunity to pray with him.

“From a Turkish prison to the White House in 24 hours. That’s not bad,” said President Trump.

Brunson, a Christian missionary to Turkey originally from North Carolina, was arrested in October 2016 and accused of aiding terrorists through the church he operated with his wife. Convicted and sentenced to three years in prison, Brunson was released for time served and allowed to leave Turkey, returning home on Friday.

Turkey accused Brunson of participating in a 2016 coup to overthrow the government of Turkish President Recep Tayyip Erdogan. Brunson was facing up to 35 years in prison if convicted if convicted of espionage, but those charges were dropped Friday.

Brunson, who moved to Turkey in the mid-1990s, was arrested and accused of having links to the Gülenist movement, which Turkey says orchestrated a failed 2016 military coup.

On Friday, a Turkish court sentenced Brunson to three years in jail but accounted for time served and suspended the rest of his sentence, making it possible for him to leave the country. Brunson’s lawyer, Jay Sekulow, is also a member of Trump’s legal team in the Russia inquiry. Brunson could have faced up to 35 years in prison. His supporters have said the charges against him are absurd. 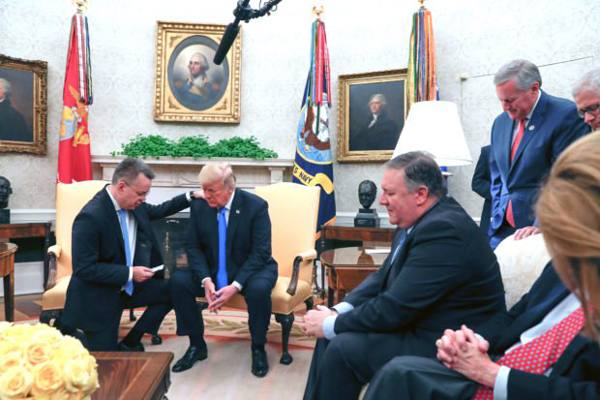 Brunson prayed for the commander-in-chief in the Oval Office saying, “I ask that you give him strength. I ask you to protect him, make him a great blessing to this country and fill him with your wisdom and strength:”

“We pray for you often, as a family,” Brunson told the president as he asked if he and his wife, Norine, could pray with him. “My wife and I pray for you.”

Preachers and others took to social media to pray and welcome Pastor Brunson home.

Jack Graham tweeted “Two reasons many of us who are evangelical Christians support President Trump is his support of religious freedom & his commitment to a conservative Supreme Court. This week we’ve seen 2 exceptional examples in the release of Pastor Brunson and the investiture of Judge Kavanaugh.”

President Trump was asked what he did differently from previous administrations to secure the release of 19 Americans including Pastor Brunson, given the U.S. did not make a deal.

Trump told the press that the situation with Pastor Brunson began under a previous administration. “They were not going to work out anything,” said Trump. “We took it over, we inherited it, and I think have at this moment gotten 19 different people out of various countries that were being held.”

President Trump remarked that he had talked with Pompeo once a day about Pastor Brunson’s situation. The Trump administration for months has advocated for Brunson’s release and backed up its demands by levying economic sanctions on some Turkish government officials and exports, damaging the value of the lira and sending Turkish currency into freefall. 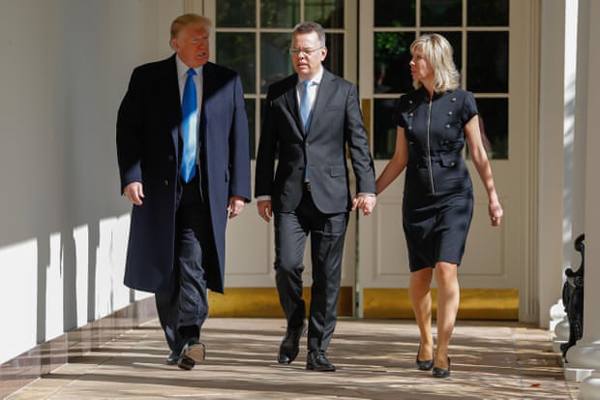 “This is a time to thank the administration and people in government who supported us,” Brunson told reporters Saturday. “We love this country. Last night we arrived in Germany on a plane that President Trump sent to take us from Turkey. And the Ambassador to Germany met us there at 1:30 in the morning, I couldn’t believe it. And he had an American flag to give us that had flown over the embassy in Berlin. And I took it and I very naturally just, I kissed it.”

“I especially want to thank the administration, you really fought for us, unusually so from the time you took office I know you’ve been engaged,” Brunson said to Trump, adding that Secretary of State Mike Pompeo, Vice President Mike Pence and so many others were involved as well. Those three, along with Ambassador Sam Brownback, Ambassador-at-Large for International Religious Freedom, have been working consistently to get Brunson released.

Trump re-emphasized Saturday that “no deal” was made with Turkey for Brunson’s release but the matter was a showing of good will that could repair the relationship between both countries.

“There was absolutely no deal made,” Trump said during the meeting with Brunson.

The president reserved the most plaudits for Brunson, commending him for the way his plight “galvanized” the country and members of Congress from both parties.

“You are very, very special to all of us,” Trump said, patting Brunson on his knee.