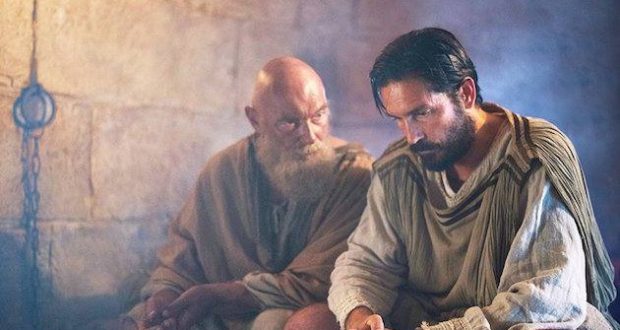 Filmmaker Andrew Hyatt understands why Christians are hesitant to trust Bible-based films out of Hollywood. As he acknowledges, the track record hasn’t been so great. That’s why – ahead of the release of his film Paul: Apostle of Christ (PG-13) March 23 – Hyatt wants Christians to understand that the people behind the movie are Christians, too.

“We’re believers,” he said. “We’re passionate about the biblical story just as much as our audience is. It was just as important to us to get it right – to stay in line with Scripture.”

Metro Voice recently spoke with Hyatt. Following is a transcript, edited for clarity, and the movie trailer at the end.

Question: Why did you want to make Paul?

Hyatt: “I just was really inspired to dig into Bible stories and Bible characters and find the community in them. We felt like it was so rare to find biblical movies that take not only truthful and scripturally accurate approach to these characters, but that also revealed the human side to them. I just started writing the script. I started with a massive, A-to-Z story that was way too long and needed to be 10 movies. And we eventually whittled it down to what you’re going to see on March 23.”

Question: When you look at the story of the Apostle Paul, there’s a ton of material. How, then, did you decide what story to tell?

Hyatt: “We asked: How do we show the world, how do we show the audience, a real glimpse of who this man was, who this guy was? That’s how we landed on this idea of Paul at the very end of his life. Who was the man who wrote ‘I’ve finished the race’? – who for 30 years has been traveling the world, preaching the gospel, stoned twice, put in prison often, beaten, shipwrecked? Who is this gritty, rough guy? So, we landed on this idea: Let’s tell the story of Paul at the very end and let him share something with the world.”

Question: What year does the story take place? What is the setting?

Hyatt: “Our story takes place right around A.D. 66-67. This is Rome at the time of Emperor Nero. It was believed that Nero burned half of Rome down. He wanted to burn it down and rebuild it in his own image. It didn’t work out for him, and he saw this upstart group and blamed the Christians. That’s where you get this widespread, massive persecution. Our movie jumps right into that moment. Paul has already been tried and convicted, and he’s awaiting the execution in the cell. In the movie, Luke sneaks into Rome just to bring his friend some comfort in his last days. But what comes out of it is this beautiful pallet of: What did the Christian community in the first century look like? What did they do to take care of each other? How did they live in such a persecuted place and still love each other? It’s about Paul in his last days speaking some wisdom and reminding them: ‘This is where it all started. It started with Christ. It’s about loving each other.’”

Question: And there’s some drama in the story, with Luke trying to get Paul’s story told in Acts without the Romans catching him.

Hyatt: “We liked this idea: Where did the Bible come from? Where did Scripture come from? It came out of a current need. So when Paul is writing 2 Timothy, it came out of a real love and a real relationship. The same with Acts. Why did Luke sit down and start writing Acts? It came out of a need. The community needed to hear from Paul and hear about his life. We play on this idea that Paul is preparing for his death and Luke is saying: ‘I’m going to write this stuff down because there’s going to be a whole new wave of Christians who are never going to meet you, and this is how they can meet you – through this story.’”

Paul: Apostle of Christ is rated PG-13 for some violent content and disturbing images.

Previous: American pastor could spend rest of life in Turkish prison
Next: Do we really have to love everyone?