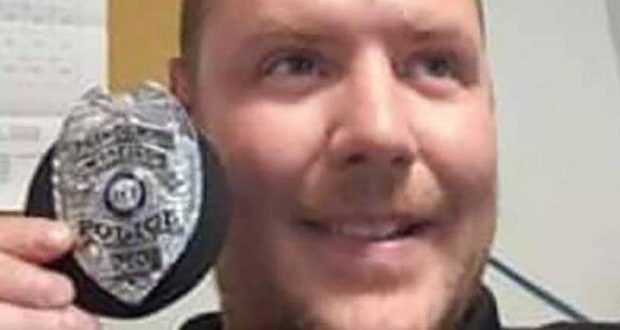 Police officer has some fun with wrong text number

A police officer in Winfield, Missouri had some fun at the expense of a misdirected texter and is getting kudos for his light-hearted response to an offer to get high.

On Friday, the Winfield Police Department shared a hilarious text exchange on Facebook between one of their officers and a person who believed they were texting the girl who they previously got high with.

After the person continuously insisted that they had the right number, the officer humorously decided to prove that he was not the girl they were looking for — by sending them a selfie, complete with his uniform and badge!

The unidentified person began the conversation around 5 p.m. on Friday by asking the “girl” if she’d like to go out later that evening.

“Hey, would you like to go to the game tonight? It won’t [cost] you, free hot dog & soda,” the message read.

In response to the invitation, the officer wrote, “I would love to go to the game tonight! Sadly I think you have the wrong number. :(“

The person, however, insisted that they had the right number. “No I don’t, we went to the game together,” they responded.

“What game did we go to?” the officer asked back.

It was at this point where things got even funnier and the person began to reference their recent drug experience.

“With Shari & Diana. We got high together girl,” the message read, before two others came in that said, “Get dressed & I will pick you up. In the truck remember?”

Providing the ultimate response, the cop then sent the badge-displaying selfie and wrote, “Pretty sure we didn’t get high together” — but made sure to offer a smile with his hilarious photo.

When his photo was met by silence, the officer decided to poke fun at the person by sending two more sarcastic messages.

“Are you still gonna come pick me up for the game though?” he wrote, before jokingly adding, “I was really looking forward to going to the game.”

The person finally did respond — but was clearly not interested in getting high with a cop.

Refusing to let the hilarious exchange end on that note, the officer teased, “I tried to tell you that but nnnooo, I don’t know what I’m talking about.”

Again, the person shut down the cop and ended their conversation by writing, “You can stop” and adding a red stop sign emoji.

Along with the screenshots, the Winfield Police Department jokingly wrote on Facebook, “We were invited to go to a baseball game tonight!!!! Unfortunately, we don’t think they are gonna come pick us up🤷‍♂️.”

The hilarious exchange earned the WPD praise from many, who applauded the cop for his humorous and quick-witted text messages.

“OMG!!! This is just waaaaaay too funny!!” wrote one user, while another added, “Best laugh I had all day thanks Winfield PD!!”

“This is the best thing I have seen all day! WELL PLAYED!” said someone else.

Others offered to take the officer out to make up for the invitation he missed out on and argued that he should’ve sent the address of the police station instead of his photo.

“So sad he got stood up for the game. 💔😭” noted another, while someone else added, “Quick witted. Love it!! Meanwhile, sorry you didn’t get to go to the game and get high in the truck. 😎😜🙃😂”

“I think you should have not sent them a photo. Send them the address of the station instead. They would have showed up ready to party! 😂😂” suggested one user.