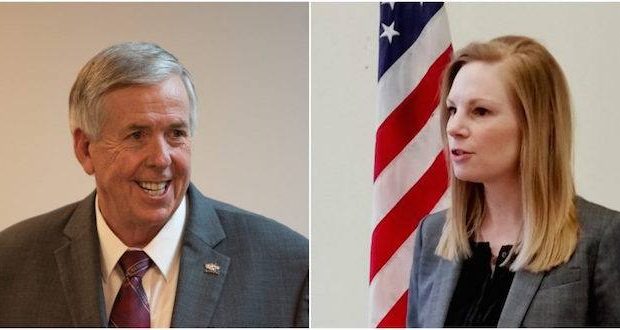 Republican incumbent Mike Parson has opened a large lead over Democratic challenger Nicole Galloway in the race for Missouri governor.

The poll, conducted among likely general election voters, also shows Parson would overcome a potential challenger in the upcoming gubernatorial election. It has Parson with a 56 percent to 30 percent lead over a matchup with former Gov. Eric Greitens. Parson came away with a favorable to unfavorable ratio of 70:8 compared to Greitens (49:26).

“The real news here is that Team Parson has now publicly confirmed that they are polling the governor in a hypothetical primary against Eric Greitens,” Eric Slusher, a Galloway campaign spokesperson, told The Missouri Times. “Apparently the rumors of their deep concern about the return of Greitens were real all along. We are truly through the looking glass at this point.”

Parson’s job approval rating came in at 60 percent, according to the survey, with only 26 percent of voters disapproving. In addition, 50 percent of voters surveyed said Missouri is “going in the right direction.” The statewide survey of 600 people was conducted by Virginia-based American Viewpoint with a margin of error of plus or minus 4 percent.

Parson served in the Missouri House of Representatives from 2005-11 and in the Missouri Senate from 2011-17. During his time in the Missouri legislature, he worked on several landmark public policy issues, including Missouri’s Castle Doctrine and the Missouri Farming Rights Amendment, legislation that changed the Missouri Constitution to guarantee all Missourians the right to farm and ranch.

Previously, Governor Parson served as the 47th Lieutenant Governor of Missouri, elected with the most votes of any Lieutenant Governor in Missouri history. Gov.Parson and First Lady Teresa Parson live in Bolivar. Together they have two grown children and six grandchildren.

Previous: Coronavirus expected to surge in U.S. in coming weeks
Next: Presidential candidate Amy Klobuchar says she welcomes pro-lifers in her party