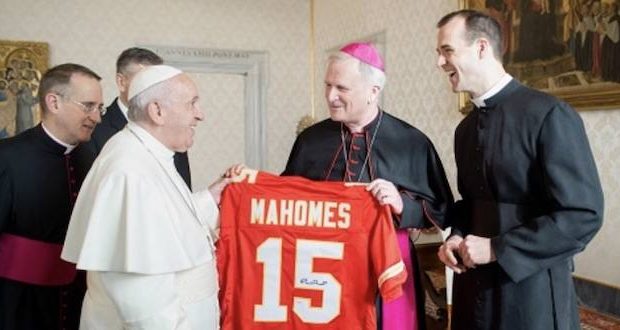 The Kansas City Chiefs may have an unlikely supporter during Sunday’s AFC championship game at Arrowhead Stadium. A local bishop gave Pope Francis an autographed Patrick Mahomes jersey this week, according to Heavy.com.

Bishop James V. Johnston of the Roman Catholic Diocese of Kansas City-St. Joseph presented the collectible to the pontiff. Although he’s more of a soccer fan himself, Pope Francis was all smiles upon receiving the Mahomes jersey.

The AFC Championship game is a Week 10 rematch between the Chiefs and the Tennessee Titans, with Mike Vrabel’s men claiming victory over Andy Reid’s side back in November. Quarterback Ryan Tannehill tossed a 23-yard touchdown to Adam Humphries with 23 seconds left on the clock and the Titans blocked a last-second field goal attempt to top the Chiefs 35-32 and spoil Mahomes’ first game back from injury.

With a healthy Mahomes under center and a rejuvenated defense since that devastating loss, the Chiefs are looking to avenge that regular season setback, and go on bring home just their second Super Bowl trophy in franchise history on February 2.

This isn’t the first time the pope has been presented an NFL jersey this season. In December, members of the Archdiocese of Baltimore gave a Baltimore Ravens number 8 jersey to Pope Francis during a visit in Rome. The jersey features MVP frontrunner Lamar Jackson’s number, has “Francis” written on the back and was signed by both coach John Harbaugh and Jackson.

“Baltimore is the home of the Catholic Church, Roman Catholic Church,” Harbaugh said when asked about the gesture. “It first started here in the New World, here in Baltimore. So it’s an honor to have Pope Francis here, obviously, especially as a Catholic. I appreciate that. And it’s kind of neat. We’ll see if he’s wearing his jersey anytime soon.”