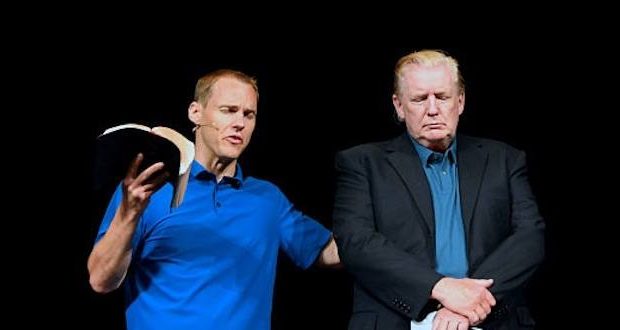 President Donald Trump made an unannounced stop at McLean Bible Church Sunday afternoon to pray for the victims of the recent shooting and for the community of Virginia Beach.

The presidential motorcade arrived at the church in Vienna, Va. where a musical worship service was taking place.

Trump, who was on his way to an afternoon round of golf before leaving for Britain, removed his golf hat as he entered the church.  The president was invited on stage and stood behind the pastor as the congregation broke into applause.

McLean Bible Church’s pastor, David Platt, asked the congregation to “pray for our president,” and they did just that.

With a hand placed on Trump’s back, Platt sealed the prayer in Jesus’ name.

On Saturday, President Trump ordered all US flags lowered to half-staff in honor of the Virginia Beach victims:

Our Nation grieves with those affected by the tragic shooting at the Virginia Beach Municipal Center in Virginia Beach, Virginia.  Americans unite in praying for God to comfort the injured and heal the wounded.  May God be with the victims and bring aid and comfort to their families and friends.  As a mark of solemn respect for the victims of the terrible act of violence perpetrated on May 31, 2019, by the authority vested in me as President of the United States by the Constitution and the laws of the United States of America, I hereby order that the flag of the United States shall be flown at half-staff at the White House and upon all public buildings and grounds, at all military posts and naval stations, and on all naval vessels of the Federal Government in the District of Columbia and throughout the United States and its Territories and possessions until sunset, June 4, 2019.  I also direct that the flag shall be flown at half-staff for the same length of time at all United States embassies, legations, consular offices, and other facilities abroad, including all military facilities and naval vessels and stations.

IN WITNESS WHEREOF, I have hereunto set my hand this first day of June, in the year of our Lord two thousand nineteen, and of the Independence of the United States of America the two hundred forty-third.

Previous: Lost cat from Denver found in Topeka
Next: Third of all Kansas counties eligible for disaster assistance