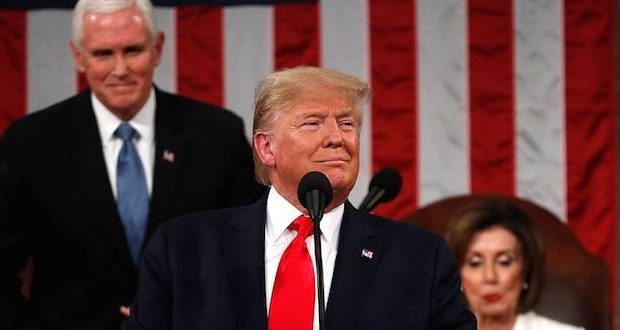 President Donald Trump delivered his annual State of the Union address extolling not only the strength of the American economy, but the resilience of its citizens.

While an expanding middle class, historic low unemployment and rising wages was the feature, it was the personal stories of the guests he brought that inspired many viewers.

“Three years ago, we launched the great American comeback. tonight, I stand before you to share the incredible results,” Trump said. “In just three short years, we have shattered the mentality of American decline and we have rejected the downsizing of America’s destiny” and the United States is “moving forward at a pace that was unimaginable just a short time ago, and we are never going back,” he added.

Trump, speaking to both the House of Representatives and the Senate, delivered the address in the same chamber where he was impeached late last year. The Senate on Wednesday will surely vote to acquit him on charges of obstruction of Congress and abuse of power, as no Republicans have signaled that they would vote to convict. Behind him on the dais was House Speaker Nancy Pelosi (D-Calif.), who made the announcement of the impeachment inquiry in late September, and Vice President Mike Pence.

Other than members of Congress, the Supreme Court justices — including presiding impeachment officer Chief Justice John Roberts — were in the audience.

In the speech, Trump used his podium to offer an optimistic and hopeful message in light of the partisan bickering in Washington. He didn’t mention the word impeachment once.

“The vision I will lay out this evening demonstrates how we are building the world’s most prosperous and inclusive society — one where every citizen can join in America’s unparalleled success, and where every community can take part in America’s extraordinary rise,” the president said.

USMCA was signed last week by Trump after being approved by both the House and the Senate. Trump in his 2016 campaign said that implementing a new deal to replace NAFTA, which was signed during the Clinton administration, would be one of his priorities, and he will likely be pointing out its replacement at campaign events in the coming months.

“Many politicians came and went, pledging to change or replace NAFTA — only to do absolutely nothing,” referring to the 25-year-old North American Free Trade Agreement that he updated with Canada and Mexico, he said. “But unlike so many who came before me, I keep my promises. Six days ago, I replaced NAFTA and signed the brand new U.S.–Mexico-Canada Agreement into law.”

The White House invited a number of guests to the address, including a Border Patrol deputy chief, a former Venezuelan police chief who was held in detention for 15 years before escaping, military veterans, the wife of a soldier who was killed in Iraq by forces associated with Iranian commander Qassem Soleimani — who was killed in a U.S. drone strike earlier this year — and others.

Socialism also was a target during the address, with the president describing it as a destructive force that is eroding both the U.S. economy and values.

“We will never let socialism destroy American healthcare,” he said.